Having  a GABS (Great Australasian Beer SpecTAPular) 6 pick, the best of celebration  package, and I’m starting with : Rye ‘N Gose Sling  from the Colonial Brewing Company

Brewed by Colonial Brewing Company this on in the style that is : Grodziskie/Gose/Lichtenhainer and they’re in Perth, Australia 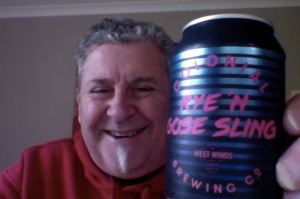 I enjoy a good pun.

This lightly soured Gose (pronouned ‘GOH-zuh’) is brewed with a handsome dose of rye malt for dryness and spice, and Margaret River seawater for tender saltiness.

Finally, it’s turned into a citrusy gin sling with a dose of Broadside from The West Winds Gin. It’ll take you straight to La La Land.

A lightly soured Gose with rye malt, Margaret River seawater and a dosing of West Winds Broadside gin. Finished with a few US hops, if Gin Sling was a beer, it’d be this. Brewed for GABS 2017.

So a Salty, Gin, Rye sour beer. ‘mkay…. Big mouth can, but I’m going to pour it into a glass, because you know, fancy, and all that.

Like a bullet crack opening that, took me by surprise. If anything that’s a malty aroma.  Then the aroma wafts over and it’s intriguing but then I lean t take a sniff and it’s gone again, oddly odd, I still get that light hoppy note though, and a mustiness. 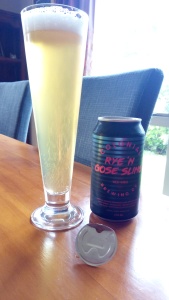 The lovely white head faded all to quickly, it looked magnificent whilst it lasted.

Aroma isn’t something I could pin down, this looked great with a lovely head but it went too quickly. Sourness is just right, but it’s not a complex beer that offers other things to entertain the palate.

For all that though this is quite nice drinking, that sour/saltiness is at the low end of the scale, and that means you get to tickle your tongue and be refreshed rather than gasping and squinting with shock, but not awe.

This is also ‘fruiter’ in some ways that other sours beers of this type, but sadly I didn’t get the Gin kick, but I did get the hoppy things.

Not a bad refreshing beer and although rather middle of the road, this is a nice choice to lead the pack.

The pdubyah-o-meter rates this as 7 of its things from the thing. It’s ok but it’s not something that you’d rave over, it’s just a refreshing beer that promises a lot and talks a better game than delivering in the tastes that it promises. I enjoyed it though it’s easy to drink and enjoy.

Music for this:  ” Cornelius ” with an Album  ” Mellow Waves”  on Spotify

Sour wheat beers were common in many parts of medieval and early Industrial Europe. Two styles – lambic and Berliner weisse – survived, but many others did not. Gose and Lichtenhainer are historic styles of sour wheat beer. Grodzisk is sometimes tart, sometimes not. Gose is seasoned with salt, Grodziskie and Lichtenhainer contain smoked malt. Historical sources are mixed about Lichtenhainer containing wheat, so modern interpretations may vary. Grätzer is an alternative name for Grodziskie. All three will be relatively low alcohol, with a strong wheat character, but will be distinct from classic examples of Berliner Weisse or lambic. As all we have are historical recreations, substantial differences may exist between interpretations