Garage Project Bhang Thandai. I have a fridge that seems to be full of Stouts, which I suppose is a winter thing, and I have to make room for incoming beer. Also I’m trying to make sure it’s quality and not quantity as I get close to the 1000 beers. It’s a challenge.

Brewed by Garage Project  this one in the style that is of a Sweet Stout  and they are in Wellington, New Zealand

I took advice on the pronunciation

In India Bhang Thandai is a spiced milk drink, spiked with bhang, the traditional edible form of cannabis, often consumed at festivals.

Shiva’s gift isn’t treated with the same tolerance in our neck of the woods so the traditional bhang has been replaced with oil from organic hemp seed added to the mash. We can’t promise transcendental bliss, but the oil gives a unique nutty character to the beer. Bhang Thandai will be dispensed

On opening that has a bouquet aroma that is many things, including something like but not quite like mint, it’s almost could also be like an antiseptic bandage 😦 It’s very sweet and compelling.

A spectacular pour of dark and mysterious beer with a lovely off white head. 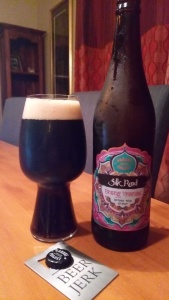 Aroma is unpickable, nothing like I can easily pick, but it’s lovely.

What a remarkable beer. The aroma is strange and yet familiar.

The bitterness is low but also insistent.

The taste is odd and yet comforting, the whole is weird and yet seems somehow to pull together.

Despite how it seems to work together there is a growing sense of dread as it snowballs on the palate, this is quite insistent beer, demanding you sip, because these flavours are quite intense and demanding. I think it’s going to be hard to push through to the end without some fatigue.

The big note in there is the cardamon I decided. I don’t know where I know that from because when do you come across  that flavour.

This turns into a sipping exercise as the accumulation of the tastes takes a bit of a toll, they’re just too odd and unpickable to make it a fun game, and either you’ve clicked with this, or are prepared to solider on and pick them, or you’ve given up.

The pdubyah-o-meter rates this as 8 of its things from the thing. This is a clever bit of brewing, as you come to expect from GP, they’re more hit than miss recently, and they have a prodigious output. This is a beer that has so many flavours that it’s hard to unpick them all, and it’s not an easy game to play.

Music for this:  ”   Fountaineer ” with ” Greater City, Greater Love ” on the Spotify

They’ve a FB page  but apart from figuring our they’re from Bendigo Australia I know nothing, except in places they sound quite like ‘The National’, and that’s not a bad thing at all

Dark brown to black in colour. Sweet stouts come in three main varieties – milk stout, oatmeal stout, and foreign stout. Milk stouts are made with the addition of lactose, and are sweet, low-alcohol brews. Oatmeal lends a smooth fullness of body to stouts, while foreign stouts are stronger (6.5-8% abv) and have a sweet malt profile and high esters. All of the sweet stouts are noted for their restrained roastiness in comparison with other stouts, and low hop levels.