Moa Milk Chocolate Stout. It’s a collaboration or a combination of things. A Moa Stout, and some Lewis Road Milk, and the addition go cocoa nibs from Belgium. It’s not a Stout with the well known in NZ Lewis Road Whitaker’s Chocolate Milk. Lewis Road, however, are a darling of the Milk industry, rich full creamy organic milks. Jolly nice milk too, and having them on your label, well that’s always a winner.

So to be accurate and because it makes me sound old and cranky essentially milk stout is a stout with an addition of sweet and unfermentable lactose. Not chocolate milk, just a lot of assumption and not a lot of correction. Probably quite a few new craft beer drinkers though.

Brewed by Moa Brewing Company This one is in the style that is Sweet Stout and they are in Marlborough, New Zealand

Decadent, creamy, rich & chocolatey are just a few words to describe this beer.

Marking Moa Brewing’s first ever collaboration with our mates at Lewis Road Creamery.Not a bad place to start might we add.

With a passion for good dark beer and rich Belgian chocolate nibs and a dash of Heilala Vanilla, we have brewed a highly drinkable stout, for those who love beer, chocolate or all of the above.

So on ope ing it’s a lot of chocolate and lactose aroma, but also a slightly sharper note briefly.

Pour is of course pitch black with a head that is dark off white and very full and aerated, It’s a noisy beer too, you should have a listen to beer now and again.

Aroma is more like a coffee than a chocolate aroma. 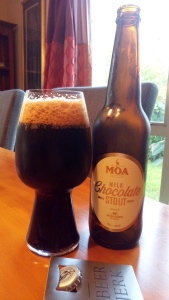 Taste is surprisingly more bitter than expected, and straight from the bottle this doesn’t appear to have much by way of body of fullness in the mouthfeel. I can’t shake that it’s also more like a coffee based beer than a chocolate beer, I’m sure it’ll get it’s legs on shortly as it warms.

A lot of hype and expectation over substance here. Lacking body and mouthfeel this is slightly more bitter than you’d expect, and it’s settled to a run of the mill Milk Chocolate Stout of no real verve.

It’s just pleasant, but it isn’t special. I wanted it to be special, but you know in your heart of hearts it’s not going to be

The pdubyah-o-meter rates this as 7 of its things from the thing. I get why you think you’ve got a party going on, because you want to believe probably. But this isn’t a beer of any particular note, unless I’m beering wrongly.

Music for this:  Acoustic by Simple Minds on the Spotify

Simple Minds are a Scottish rock band that formed in Glasgow in 1977. The most commercially successful Scottish band of the 1980s

The Album like the beer a bit of a mixed bag, not as ‘Acoustic’ as you’d think, but some very familiar lyrics and some nice sing along parts.

Dark brown to black in colour. Sweet stouts come in three main varieties – milk stout, oatmeal stout, and foreign stout. Milk stouts are made with the addition of lactose, and are sweet, low-alcohol brews. Oatmeal lends a smooth fullness of body to stouts, while foreign stouts are stronger (6.5-8% abv) and have a sweet malt profile and high esters. All of the sweet stouts are noted for their restrained roastiness in comparison with other stouts, and low hop levels.