Also don’t forget that The Crystal Palace Eagles gave Chelsea a touch up today, I’m feeling glad all over. (If you get none of that email me or comment and I’ll gladly bang on about the pride of South London, The Eagles and how the world is a better place)

..nuances of pepper, clove, and banana..

Brewed by Stone Brewing this is in the style that is Belgian Strong Ale and they are in Escondido, California USA

In 2008, Stone Brewmasters Steve Wagner and Mitch Steele traveled to Belgium, where they enjoyed a number of hop-forward Belgian tripels, pale ales and IPAs—beers that had taken a cue from the U.S. craft brewing movement and inspired us in return. It’s a big reason 2008’s summer season came to be known at Stone as our “Summer of the Triple.” Upon their return, they crafted Stone 08.08.08 Vertical Epic Ale, the seventh beer in the 11-beer Stone Vertical Epic Ale series.

Horizontal on the pour

The Stone 08.08.08 Vertical Epic Ale is a strong Belgian-style IPA highly hopped with American hops (Ahtanum, Amarillo and Simcoe). The beer pours pale golden with a thick and creamy white head of foam. The aroma is full of depth: nuances of pepper, clove, and banana from the Belgian yeast strain, and the resiny citrus notes from the American hops blend together nicely to provide a complex aromatic character. The taste is spicy, hoppy and fruity, with a very dry and a pleasant bitter end. The bitterness lingers nicely and provides a refreshing finish!

Hints of a bubblegum aroma, but there’s also a tartness, this might though just be that gap at the top of the beer and cap. 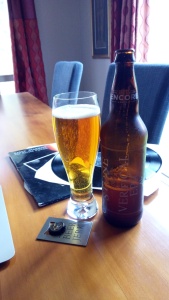 Pour is a crisp golden orange beer, with a small and frightened head that just about sits and does not fade.  There’s not a lot of aroma really, which is odd. I’d left this to warm from fridge to nearer room and expected a bit more.

An unusual beer, little aroma, great looks, but not much by way of a head. Beer is unusually sharp and tart but has an earthy dryness at the finish.

That earthy dryness only gather legs as it warms up, attaching itself to an alcohol tang as it does making it quite the giddiness.

But it does begin to get there.

Sure it’s a ‘strong’ ale, and I’ve had a couple of those, perhaps the American take on these uses a softer less bold hop that doesn’t work so well with that yeast, I’m not sure, the yeastiness that you might like is there as a peak and it’s attached to a tang in the same place, making it a quite peaky beer. I know there’s not supposed to be a bold hopiness, but I was expecting bold yeastiness.

The gap between expectation and delivery – that’s the disappointment .

The pdubyah-o-meter rates this as 8 of its things from the thing. I’d like to have liked this more, but I was disappointed by the apparent lack of aroma, and it seemed to take an aged to gather up steam.

Music for this:  Ziggy Stardust And The Spiders From Mars (The Motion Picture Soundtrack) by David Bowie  I’m listening to this on the vinyl version, because I can.

Ziggy Stardust: The Motion Picture is a live album by David Bowie, corresponding to the film of the same name. The music was recorded at the Hammersmith Odeon in London on 3 July 1973, although the album was not issued by RCA Records until 1983