That’s it then, that’s perfect. A Garage Project Gyle 500 – 1,000 beers, and a change of plan at the last moment and the grande finale was dropped to something more manageable, but equally as celebratory.

Garage Project reached 500 brews and released a beer to mark that occasion. I’ve reached 1,000 beers, which is twice as many beers as they’ve brewed, and that seemed to be some kind of synergy.

Smooth with vanilla with a light chocolate biscuit.

This is a 500ml bottle of a beer that is 14% ABV, making it around the 380ish calories a serve, this bottle is around 5.5 standard drinks

Gyle 500 is brewed by Garage Project this one is in the style: Belgian Strong Ale and they are in Wellington, New Zealand. I notice that the Brewers Guild in NZ has this listed in  “Specialty, Experimental, Aged, Barrel, Wood-Aged” where it ran a Bronze award. 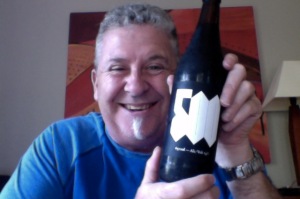 Gyle 500 is our strongest brew yet, aged for over a year in only three bourbon barrels-resulting in a decadent strong dark ale.

The label type is an original work by local legend Klim Type Foundry, making this a true collectors item.

That’s a big aroma, for moment I got a burst of orange pith, and sugar sweetness, then it settles into a darker chocolate note, it’s amazing, or I’m exaggerating with excitement.

Pour is darker brown, but not pitch black, and no head, which Iw as disappointed by.

In glass aroma is a very familiar Belgium yeast.

That’s a big a beer as I’ve had in a long time,, it’s a real full mouthfeel alcohol tang sweet dark bitter gorgeousness of a drink.

Everything a celebration beer should be, this has a big aroma, and big mouthfeel. Bitter dark sweetness with an alcohol tang and a dry finish. This is rather the nicest beer I’ve had for a while.

This is a beer I don’t want to finish,  you get that nose of aroma, then you get a sup, which leads to the alcohol burn underneath the fullness of deep dark flavoured beer, and then a smack of dryness.  It could be addictive.

The alcohol in this does somewhat being to gain momentum and take over as a lead, but the supporting cast are doing their bit, but sadly this a beer that starts to become a bit hard work as a contemplative exercise, and whilst you really want that burn and the smoothness you also don’t want it.

The pdubyah-o-meter rates this as 9 of its things from the thing. A big big beer that has a lot of really nice and enjoyable facets that become overwhelming and eventually overwhelmed by the alcohol tang. But it is glorious!

Music for this:  Frampton Comes Alive! (Deluxe Edition) by Peter Frampton  on the Spotify