Craftwork Grisette. A quite specific and unusual style of beer, one that has the purist drooling in anticipation, and brings the the brewer a kudos among their peers. Apparently.

Sweet with a dry

Craftwork Grisette is brewed as a Grisette, which most closely resembles the style that is a  Saison It is brewed by Craftwork
who are in Oamaru, New Zealand
This is a  500ml bottle of a beer that is  5.2% ABV and 25 IBU,  around the 155 calories a serve size, this would be 2.05 standard drinks in NZ. 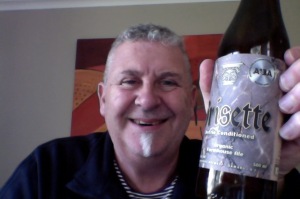 Grey would be right

This straight Grisette is our response to the Spelt shortage of 2014. We substituted organic raw wheat and oats,which has contributed a good mouth feel.
Now we can source organic N.Z. noble hop varieties, so we threw in 3 types and whole flowers.
Sweet with a dry finish and a big head Grisette is a refresher, best at a cool cellar temperature.

Grissette (From Farmhouse Ales by Phil Markowski) “As the landscape of Hainaut province began to shift from an agricultural to a coal and stone mining region in the late 1800’s, local brewers began to market a beer to the growing population of miners. As saison was considered the drink of farm workers, grissette was the brew of the miners. The origins of the name are sketchy (gris means gray in French). Grissette is commonly said to refer to young women who worked in factories and wore a distinctive gray frock as a uniform. As one story goes, these young women, grisettes, would hold trays of ale to refresh the workers as the exited the mines. The term has also been attributed to the color of the prophyritic stone mined in the area of northern Hainaut province

Well I found the largest glass I could in the similar to a goblet style that I have. The trusty giant wine glass. Ridiculous.

Pale yellow hazy pour with a stark sharp fluff of white on top, the aroma in this is quite sweet, soft yeasty, not that bubble gum sort, but leaning a more sour aspect.

It is very carbonated, and that never really helps in the appreciation of taste, a bubble pop tramples over the tongue, this is a sharp tasting, not bitter sharp, but pointedly sharp, beer that has a musty/dusty lingering note in there. It isn’t the most comfortable of beers that I’ve ever had.

I like it more as it sips itself empty, it stays the same, mustiness doesn’t get more intrusive, and the it doesn’t veer off to  more bubblegum.

But I’m not sold on it as as a style.

The pdubyah-o-meter rates this as 7 of its things from the thing. I’m not totally sold on it, I understand that it’s one of the things that’s not like the other, and it might be well done, but there’s not quite enough engagement with the profile that makes you want to quaff and be merry after a long day doing whatever it is that earns you coins.

Music for this:  Family Tree by Coach Which I’m listening to on Vinyl but you can play along on Spotify.  The album is from 2012.