Liberty Prohibition Porter  is an annual beer, and one that I look forward to. This is one of the beers that brought be back to wanting to blog about beers, and it’s been in the fridge for too long. And there’s never a bad time to have a Porter.

To prevent this mediocrity reoccurring

Liberty Prohibition Porter is presented in a 330ml bottle with beer that is 12.6% ABV, which makes is about 3.3 standard drink units, and which is around the 380ish calories a serve size

Liberty Prohibition Porter is brewed in the style that is of a Porter – Imperial / Double Which is brewed by Liberty Brewing Company over there in the picturesque Helensville, New Zealand

Inaugural Golden Kiwi Pint of the Beer of year 2018 1. @libertybrewingnz Prohibition Porter – It was a gold medal winner at the NZ Beer Awards, topped the Beervana People’s Choice Awards and became New Zealand’s highest rated beer on Untappd. Add to that seven of our judges ranked among the best of the year as well. It just pipped Urbanaut Copacabana thanks to its high Untappd score so becomes a worthy winner as New Zealand’s most popular beer with awards to back it up. Why so good? The love and labour that’s gone into making this reflects the passion for flavour and quality that defines what Joe Wood and his team at Liberty Brewing believe in. No shortcuts here, no added flavours or tricks – just a very good base (the mash process for this alone is like hard labour), aged for a year in hand-picked Kentucky bourbon barrels where nature does it work in adding vanillin and tannic bite to a super-sweet base. At 12.6 per cent this is no booze bomb – it is unctuous with layers of chocolate, vanilla and dark berries but finishes surprisingly (and relatively) clean and dry. A masterpiece. Some notes of this process – I started this as a way of talking about great beer without relying on my own experience. It’s impossible for any beer writer to sample all the beer on offer so I went for a collective consciousness with 11 others to see if we could get consensus … narrowing it down to 40 beers was incredibly hard but I tried to apply a rigorous process. While the choices were diverse and eclectic there were some strong common threads. Without doubt the standout breweries according to the judges were 8 Wired, Parrotdog, McLeod’s, Sawmill, Craftwork, Behemoth and @garageproject who had heaps of “nominations” but because they produce such a wide variety of quality beer every judge had a different favourite. I hope you’ve enjoyed the exercise – it was a bit of fun – and I thank again the wonderful bloggers and writers who helped — @alnev @jonogaluszka @johnoszajca @taste_vicariously @mitcht_regionalbeer @philipwalternz @beerjerknz @thebeerexpedition @max_beer_blog @jasongurney @craftbeercoll #nzcraftbeer #nzbeer #goldenkiwipints #beerawards 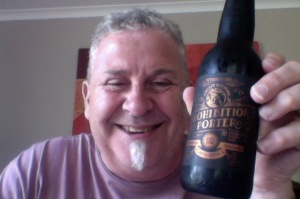 To prevent this mediocrity reoccurring, Liberty has placed a constitutional ban on vapid watery suds.

If you have a bad case of the ‘drys’ this mobilised ‘wet’ crusader will bring big alcohol and even bigger taste to your palate.

Let the redolence emitting from the seasoned bourbon barrels enter your proboscis and take your cognitive being to a state of joyful equanimity.

On opening this has a deep rich aroma of steeped fruits, it’s an aroma that brings back fond memories. 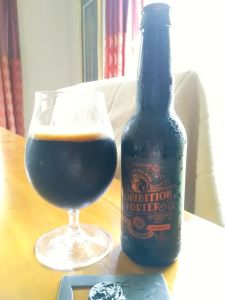 Dark pour is like watching molasses, as it gloops into the glass with not much of a head forming.  The Aroma fills out with chocolate like notes, raisins cherries.and perhaps vanilla.

The anticipation was more than I could bear, the taste bomb that this delivers is almost beyond description. It’s a warming boozy full mouthfeel of glorious sensations, and I’m not making this up to hat-tip the award, the last year version was amazing too.

The heat you get that the back from the alcohol hit isn’t uncomfortable and sits atop that rich smooth body of full flavoured that makes it something to relish and not flinch at, a magnificent counterpoint to the smoothness, the iron hand in the velvet glove.

Can’t believe I was about to open this as the winner of the poll was announced. I have to confess that my entries were somewhat more left field and perhaps eclectic, with an IPL on my list, nothing wrong wth an IPL though, and I’m pleased that whist some of the beers weren’t on my list all the beers listed were magnificent and worthy.

The pdubyah-o-meter rates this as 10 of its things from the thing. It’d be hard to be as fullsome and wordy about the beer then justify why is wasn’t one that you’d want everyone to try, This is a rare 10 on the pdubyah-o-meter, particularly the 2018 year where I was sidetracked for most all of it.

Music for this:  ”Tearing at the Seams (Deluxe Edition) by Nathaniel Rateliff & The Night Sweats on Spotify

Black or chocolate malt gives the porter its dark brown color. Porters are well hopped and heavily malted. This is a medium-bodied beer. Porters can be sweet. Hoppiness can range from bitter to mild. Porters are often confused with stout