One of the great things about Social Media is the randomness of things. Sometimes it veers off to the ‘social’ as it is supposed to be.

So when this happens, the social,  it’s lovely, and I’m happy that Clements and Daughter, the most micro of micro brewers, with a range of beers that are intriguing in their span, and delightful in their presentation sent me unbidden (Well there may have been banter) one of each of their current crop of beers. Getting them in the fridge and getting myself organised was the hard part, and without wanting it be twattish about it here we go. The Sunday Vinyl, Three Beers, Two Cheeses and 5 LP’s

Yes that a Tuatara Bottle on the right, not only a micro brewer but environmentally friendly too.

Clements and Daughter, based in Wellington.

There’s a Hoegaarden Style, there’s a Garage Project Saison Style and a Stout version of beers with a range of the ABV things. The Vinyl – a 1985 compilation of Bob Dylan songs in a set 5 LPs called “Biograph”

Brilliant aroma on opening, as it did with a nice hiss of carbonation, pour is outstanding, cloudy yellow golden with a head that is bright white and persistent.

In the glass the aroma is just as lovely, with that soft Belgium yeast bubblegum hint.

The taste starts off like a rocket from the blocks, it’s rather nice upfront, and there should be no mistaking for it’s lesser known namesake from Hoegaarden. The only difference is that after that initial surge of loveliness there’s a slight pause, a gap where you’re expecting some fullness to be. There’s some really nice notes of lemon in this, and although it retains its level it doesn’t quite lift in the middle with a softness. (Of course Lemon, or orange, and you say banana I say bubble gum)

This isn’t a commercial beer, it’s not a mass produced long shelf life product, it’s a home-brew, and  it is outstanding. Choosing perhaps arguably the leader in that segment to mimic was a brave choice, which has paid off.

The pdubyah-o-meter rates this as 9 of its things from the thing. This is properly nice and very pleasant beer, if you didn’t know it wasn’t the commercial version you’d probably struggle. Also I think that this is much better than some commercial Witbeir that I’ve had.

Second: Saison Du Garage – a 500ml bottle of a beer in the style that is of a Saison

Was a bit worried about this one as the grsins had been sitting for a month and I had forgotten them…but here we are and it’s a decent effort. Fruity, good taste and a little bit boozy.

I love a Saison or Farmhouse ale, I think one of the first craft beers I brought was the 3 Monts beer, so they have a memory for me.

Lovely on opening, although I thought it was more bubblegum than dust yeast that came forth.

This honestly does not taste like a Saison, which I expect to be mustier/dustier in many ways, this is much brighter and more towards a begum strong ale possibly. Nothing wrong with that though as this does drink rather well, a lovely level beer that doesn’t have any sharp peaks or dips, and importantly doesn’t veer off with that alcohol tang at the end that you sometime get.

This is like a dark version of the Hoegaarden, in some ways comparable to the Lefee Blonde and Laffe Bruin, where I prefer the Bruin.

Taken at face value and from the brewer, this misses the mark as a Saison, in my opinion, but somehow gets closer to a bullseye on the scheme of things.

As a beer this is quite sweet and it might be hard to have a couple of these without looking for a side bar of something to get your taste buds back into line.

I’ll tell you what though this is chuffing excellent beer of the first class whatever it is.

The pdubyah-o-meter rates this as 9 of its things from the thing. Two in a row at 9. What a time to be alive. I did think that this ended up more towards an Abbey Dubbel than a Saison, which I could be dead set wrong about, but I’d never pick it as a Saison, perhaps a Belgium Strong ale, it’s difficult, I’m not an expert. 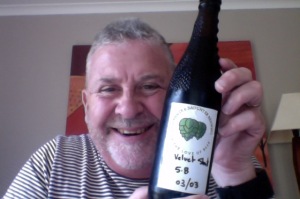 A stout with hints of chocolate and a just a touch of lactose at the end of the boil for a subtle sweetness. Very smooth and nice mouthfeel

Right, there is absolutely no mistaking the malt sweetness in this on opening, a lovely hiss of carbonation carrying that outwards. Most enjoyable

Pour is a muddy brown affair that seems to be under-carbonated but ir musters a head that starts with good intentions and then faded to a sulking film to one side.  It looks flat in the glass too.

Aroma in the glass is a beer that has a chocolate or burnt oat about it and a milky softness on offer.

The taste, starts well, with a understated fruit note that’s carried on a soft pillow that offers to look and fill out but don’t quite get there, leaving this a little under bodied or thin, which could be that there was a worry at the lactose stage perhaps.

So a lack of fullness or mouthfeel are the worst things that I can say about this beer, and when I read the brewers notes I now see where I’d gone off track, because they’ve added the hint of lactose.

For beer at home this is remarkable in a lot of ways, it’s not rough, it’s not peaky, it’s not mechanical, there’s accomplishment and enjoyment in the making of it that shows thought. The expected levels of that chocolate and the inherent fruit sweetness are lovely

As it warms the other things in this beer being to come forth, there’s a familiar edginess in this in the lingering notes, there’s a lovely fruitless in the initial sup, and things you expecting a stout, that slight bite, a little fight are there, they could be brought more forward of course. I’d like it be be fuller in the mouthfeel, but I really like that burnt note on the palate and that lovely chocolate on the nose.

The pdubyah-o-meter rates this as 9 of its things from the thing. This is beer that is the equal or better of many commercial version of this style, and does not pretend to be something it isn’t. I think I’d like more mouthfeel, but I wouldn’t want to take away from that edgy carry, and there’s plenty of sweetness and things to enjoy elsewhere.

So here’s the thing, if I didn’t like them I’d be telling you they were awful or where I thought they didn’t work. All three were properly nice beers that I would pay money for, and in some instances I’ve paid money for commercial variations that have been a bit regretful. For me the Saison, or whatever that turned out as, was the beer of the three, the Stout was really good and it’s neck and neck, but that BackGaarden was pretty special and I’d be chuffed if I’d brewed that. There’s nothing in it though, brewing at this level can’t be a fluke or luck, thank you for indulging me.

Music for this:  ” Bob Dylan – Biograph on the Spotify