I find myself with a  beer from Moon Dog – this one is the  Black Lung VIII. How have I missed 7 other versions, why don’t I pay attention more, do I need to keep lists, all these questions and very few answers.

gasping for that last breath

Black Lung VIII is a 650ml bottle of a beer that is 8.1% ABV, which would be around that  243 calories a serve things, and 45 IBU things are included.  Imperial stouts are usually found in the 50-80 IBU range.This is 4.2 standard drink units in NZ
Moon Dog Black Lung VII is brewed in the style that is is a  Stout – Imperial,  and is brewed by Moon Dog Craft Brewery who are in Abbotsford, Australia 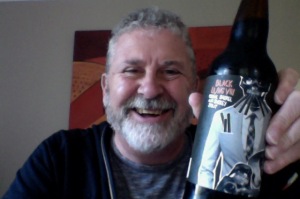 This really, really, ridiculously good looking eighth incarnation of our muchly-beloved peated stout (this year aged in cognac barrels) will leave you gasping for that last breath of clean air before succumbing to the intense chocolate, roasty, shmokin’, cognac-y flavour..
So, What could possibly go wrong?
Well I left the music choice up to the daily pick on Bandcamp, and then looked it up on Spotify so you can sing a long. Neo-Soul Jazz. ‘pon my soul yes.
Lovely smokey aroma on opening, which it did with an excited hiss, and that’s all you can discern really.
Pour is dark, what a surprise, and there’s really a brilliant coffee tinged head that looks like it’s going to sit for a while. The aroma in the glass isn’t as strong as the opening, like there’s nothing strong in it that you can pick.
The taste, I’m not sure whether to brace myself for this or not, There’s a tang of the alcohol, and then a completely unexpected really really soft and understated decent into a rich smooth taste beer that brought rather a smile and and eyebrow movement veering towards a frown.

The cognac is that subtle that not being an expert on cognac I have to surmise that it’s there, I’m kidding a little there is a background go spirit on this. There’s also a light and tight fruitiness in this that sits between the two edges. What I’m not getting is any intensity of chocolate or that smoked note that the initial aroma promised.

I’m also not getting anything that you might expect in oaked beer, like a dull woodiness for instance.
What I am getting though is a remarkable beer with a great mouthfeel that isn’t full or thin, a nice looking beer that sits well in the glass, an unexpected journey through some tastes that capture the imagination, and satisfaction at having a decent drink on a sunny afternoon with some nice music in the background (see the choice below)

The pdubyah-o-meter rates this as 8 of its things from the thing. It’s not setting the world alight but it is a fine example of beer brewed consistently well and practiced.

The double dip review:  What a lovely beer this is, Despite the big words and strong warning this is a beer that is just nice and well behaved, super smooth once it settles you get a whole palate of flavours rolled out in a sensible order and without any peakiness. A delightful beer for a sunny afternoon.

Music for this:  Suzume by J.Lamotta on The Spotify

An Album by J. Lamotta which according to Bandcamp is a refreshing neo-soul jazz album. The Berlin-based singer has returned with a sophomore album that is expansive in its borrowing from jazz, neo-soul, and hip hop elements.