McLeod’s Tripel. Part of their limited Smuggler’s bay series, numbered bottles and everything. This is bottle 968 of 1500. I’ve had this beer before, this vintage, but I never wrote it down. Spoiler Alert – it’s very good.
Back in November, when I was taking a few weeks off  the writing I was of course still drinking, and I noted that this was possibly the best Tripel in NZ.  Turns out it is the best in Aus/NZ winning the only gold in Class at the AIBA beer awards. 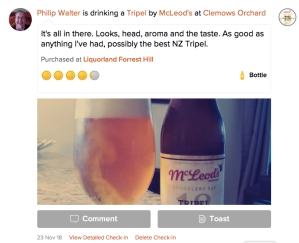 I know about this award for this beer because of the run-in I had with wth the brewer over my comment on the Barley Wine that I didn’t care for and I still think was a rogue bottle, and I was copied into a tweet about this win. So I’m taking that. You can tell however that that particular interaction did really upset and unsettle me, and I will eventually let it go, but for now,  how’d you like those apples brewer man?

McLeods Dubbel is brewed in the style that is a Tripel and is brewed by McLeod’s Brewery  who are inWaipu, New Zealand 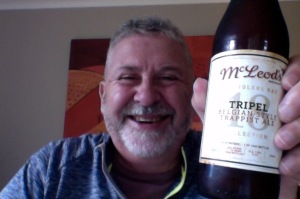 It’s good as I look

So, What could possibly go wrong? Once again I find myself at the measure of the temperature stick as the label indicates a temperature range, and I know that either this isn’t cold enough or the measuring thing is wrong.

The initial aroma is bready yeast when I open this.

Pour is an orange gold with a head that just keeps growing and getting bigger, not enough to top out the glass and spill over but it looks like an ice cream soda. It’s very lovely in the glass with all sorts of bubble action going on.

Hard to get an aroma let alone taste from foam, but I tried, and eventually got that full sugary malty taste with that intense and very familiar yeasty note that make this style of beer amongst my favourites.

There’s something really satisfying about the delivery of an expectation, and this has that. 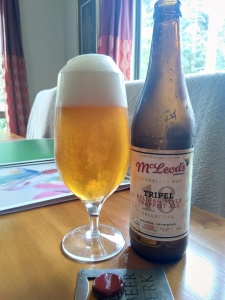 A high level of sugar sweetness really bounces off that Belgian yeast which elevates this from the ‘on style’ to giving it that subtle and understated lift into ‘great at style” beer.  I thought it was the best Triple that NZ had, and I think that there is possibly only one brewer that would be a serious challenge, Craftwork, and I’ve got those in the fridge so I’ll be able to at least pontificate on their respective merits.

I like best that this is kick-ass, for me, the best Tripel from a New Zealand Brewer. I did when I had in from a keg, I did when I drank the bottle and I’m reminded again now why this is something special.

The pdubyah-o-meter rates this as 10 of its things from the thing. Outstanding. There’s no other way to describe a beer that blindfolded you’d pick for style, taste and excellence, and then get wrong about the country of origin. I wasn’t wrong about this being, for me, the best Tripel in NZ that I’ve had. You might get all about the 4.1/4.2/4.5 rating on untappd or the other apps, calm you farm, this is all that, but this blog isn’t that. The pdubyah-o-meter says 10 handle the jandle.

Music for this:   I Am Easy to Find by The National on the Spotify player  – if you want to play along, I’m playing this on the vinyl version that I just brought.

I discovered that this ia triple album with only 5 sides – there’s a whole side to a vinyl LP that isn’t printed. What trickery is that!

Like other abbey ales, Tripels are strong, yeasty-malty beers. But they are also pale, and have a notable hop profile. Hop bitterness may be higher than a typical abbey ale, up to 35IBUs. But the finish is where the hops really shine, as tripels should finish fairly dry. Otherwise, maltiness is still essential to the style, and the assertive yeast note typical of all abbey ales will be more apparent in tripels, since they do not have the rich dark malts to distract the palate. Alcohol flavours feature more prominently in Tripels that in just about any other style.