Garage Project Muse Au Naturel, where I find myself on that unfathomable quest as to why I do or don’t like Sour beers.

in its natural state 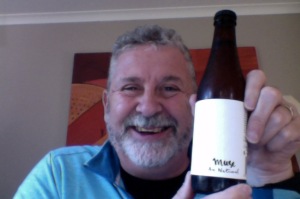 I do have more than one warm top to wear honest

Muse: Au Naturel – our Wild Workshop ‘house sour’, a pristine blank canvas that invites creative possibilities. Fermented with Lactobacillus and our own saison blend, and conditioned in oak barrels,

Beautiful as it is in its natural state, or as the base for other Workshop releases exploring fruit & flavour infusions.

“Brewers make the wort and yeast makes the beer”. Yeast is all around us and different strains can radically effect the flavour of a beer. There are all manner of wild yeast varieties floating around the Wild Workshop which can make magic tasting beers but would infect and ‘ruin’ everything in a traditional brewery. Muse has a very simple malt base which was fermented with Garage Project’s saison blend and Lactobacillus and aged in oak barrels. Lactobacillus is a bacteria which produces sour lactic acid. Muse serves as the marvellously complex yet drinkable tart, sour canvas to which Garage Project are building a whole series of beers on. Each iteration of Muse is made with different additions. The infusion of dry hibiscus gives this iteration of Muse striking colour, aroma and flavour. The freshly zested lemon peel makes for a long dry zesty finish. 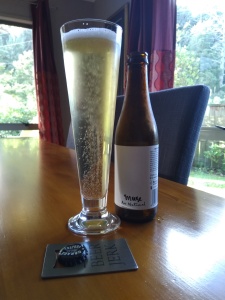 A beer that is a lot paler than I thought it was going to be, almost clear, this has just the hint of pale yellow, and could easy be a cider.

Settles into the glass as a musty aroma’d thing with lots of carbonation but no head.

It’s not quite pucker up sour but it is quite tart, and it is completely gorgeous. There’s this lovely quite soft carry in this that presses down that sourness until the last possible moment when you get a full mouth explosion.

That explosion at the back is squinty puckering brilliant.

Let me reming you that I don’t like sour beers, and yet I’d put this on the side of the ledger where you’d find the sour beers that I do like.

The pdubyah-o-meter rates this as 9 of its things from the thing. I’m honestly not a fan of sour beer, I get them, I appreciate them, and I infrequently enjoy them, this is one that this on the side of the good sour beers that I’ve rather enjoyed.  Light sourness initially that explodes at that back with a puckering goodness that is most entertaining.

Nathaniel David Rateliff is an American singer and songwriter based in Denver, whose influences are described as folk, Americana and vintage rhythm & blues. Rateliff has garnered attention with Nathaniel Rateliff & the Night Sweats, the soulful R&B combo he formed in 2013.