Moon Dog Jumping The Shark 2017. A beer that has been in then back of the fridge for too long. Possibly. I can’t remember buying it but that also might be an age thing.

And that was just the start. ….. freeze concentrated to up its potency

Moon Dog Jumping The Shark 2017 is a beer in the stye that is an IIPA – Imperial / Double IPA, Brewed by: Moon Dog Craft Brewery who are in Abbotsford, Australia 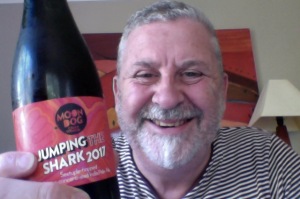 It started out as a big IPA, was hopped at pretty much every stage possible from mash through to post-fermentation.

And that was just the start.

The beer was sent offsite to be freeze concentrated to up its potency then returned to the brewery for a final dry-hopping. In all, 20 hop varieties were used and it ended up at 14.4 percent ABV.

So, in terms of jumping the shark, it ticks the boxes.

That is a really heavy aroma on opening, as it did with a faint hiss The cap was tight on this one, I was worried my frail hands were letting me down, but I persevered.

So the aroma is a heavy hop.  The pour is outrageously pretty, a bright orange burst, that is much paler than I would have expected, and it sits there glorious with a a decent fluff of head that makes it look very inviting.

The Aroma is the same heavy hop note, so that’s good then.

Not as surprising is the alcohol tang in this, there’s not a lot of mistaking that you’re getting an over-sized sip of beer. There is also a glorious bitterness with this and a comfortable dryness, and an unexpected burp.

The aroma seems to have become more towards oranges, which is nice on the nose.

The aggressive over-bittered and concentrated alcohol means of course that this becomes a sipping beer quite quickly,  Slowing down helps to pick out that citrus note amongst that carnage and surprisingly this is quite strong amongst the noise.

A beer that brought a bit of conflict then.  It ends well though with a smile and thoughts about just how much a decent DIPA is a thing of beauty, to look at and to taste. This is unfiltered beer and the picture is straight from the camera, so it really is that outrageously pretty

The pdubyah-o-meter rates this as 10 of its things from the thing.  I liked this because it was exactly as they said it was going to be, and it really might have jumped the shark at the sex-tuple freeze thing. However it really is quite clever and really is quite nice to drink, it’s just a big beer, but done extremely well. Yes of course on Insta and the Ratebeer / untappd apps I might have gone 4.3-4.5, it really isn’t a perfect beer and there are edges that don’t fit. However as a beer that I’d be happy to put front and centre as brilliant this does tick that box for me.

Music for this:  The Beatles Help on Vinyl popped out of the crate so listen on Spotify if you must

Listening to these older albums remind you that not everything the Beatles did was of note, Although this does have Help, Yesterday, You’re going to lose that Girl, and You’ve got to hide your love, you could be scratching around for good  memorable quality on this. Not that there should be 14 greatest hits on one Album.