Not the usual this one is the big one, the Gran Torobayo. I was out buying beer from Hopscotch beer, you’d be familiar with their bottle, it’s in a lot of pictures where I use it at the fill station.  Anyway I’m always looking for the new, and they had these, the Kunstmann Gran Torobayo, a beer from Chile. What could possibly go wrong?

I didn’t quite get through the Cowboy Junkies so I’m still listening to that. I can’t help some things.

Gran Torobayo is a 500ml swing top bottle that looks great, a beer that is 7.5% ABV and about 225 calories a serve, this is 2.96 standard drinks in NZ

Kunstmann Gran Torobayo  is made in Valdivia, Chile in the style that is a  Strong Ale – English and it’s brewed by: Cervecería Kunstmann 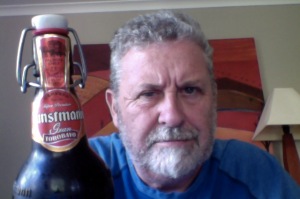 The Man has Spoken

Brewed with pale and special caramel malt, hops imported from Southern Germany, fine Ale yeast and pure water from the Mountains near Valdivia.

This beer of Super Premium character has a great aroma and leaves in the mouth a fine smokey sensation.

Well off the bat this os past it’s best, I was told that and yet I still did it. It is only just past best, and that’s just a thing right, aged beer is a thing, right? 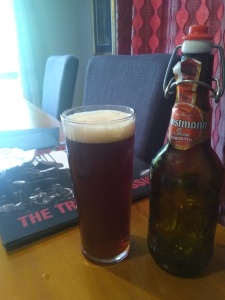 A lovely looking bottle, the swing top and the decoration, I have no idea what I’m going to do with this when I’ve finished the beer, there’s always fanciful notions of making some kind of sauce to keep from the lemons on the trees or some nonsense. It never happens. Won’t happen this time either.

It near on opened itself there, a loud pop that frightened the cat, and me.

Then there was a wave of Hop aroma, a big wave of hop aroma, and that dark malt, a lot of that too. It smells from opening like someone went mad with something they shouldn’t have.

The pour is of a dark beer with an offwhite head that looks ok. It is extremely malty on the nose.

I sip, It is all action, and hits like a seep twitch, there’s a punching malt and then not a lot else, it is heady and full, quite rich and you just know it wants to be a big beer. The aroma saves it somewhat, yes I know a lot of malt, but there is a distinct throw to hoppiness, and that’s quite nice.

I write oft about “Fullness” in a beer, that mouthfeel fluffiness. This has that, a full mouth of beer, although this is an overwhelming mono-note. Somewhat cloying and sickly somewhat, difficult.  I don’t even know what you’d balance this up against to calm it down. I don’t think it’s that kind of beer,.

The pdubyah-o-meter rates this as 6 of its things from the thing. This might be a “big” something but it seems to have completely lost what it is all about, I don’t think I’m ever going to try the standard version though, but, and I’m going out on a limb here, I recon it’s just as dire. 6-7 is above average, this isn’t shabby beer, it is  just not good beer, or beer that seems to have had a lot of thought about what it is. . Also, importantly, it’s a beer out of context, I have not a single clue about what is what in Chile when it comes to beer. I don’t think this sets the bar, unless the bar is slightly strong beer in a swing top bottle.

Music for this: Oh it’s true I’m still listening, about 4 time through now, it’s got something about it that calls to me.  I have it on vinyl, but you can listen to ”The Trinity Session by Cowboy Junkies on Spotify