Meantime at the other end of the  spectrum of beer styles from the Sour Cherry Saison I tried in the last post (yesterday in the real world), or the opposite point on the beer compass as you will,  I’m now going to have from Mythica Brewing a Hel Dark Deception a Black IPA.

There’s something compelling about a black IPA that seem Wanty.  Well here I am with a Black IPA, who knew that was going to happen?

Hel: Deception in a typically magnificent in terms of artwork, a 400ml can is a  beer that is 6.6 ABV which is something like 2.3 standard drinks in NZ
Hel is brewed in the style that is an IPA – Black / Brown / Cascadian Dark beer at Mythica who are in Glenfield  🇳🇿 Auckland, New Zealand

This is a Black IPA/NEIPA hybrid.

Hel, Norse goddess of the underworld.

Pour is a polished hazelnut colour that is much darker in the glass than in he flow, with a lovely just dark tinged head that seems to be happy as a finger deep.

The aroma is surprisingly pleasing, a sweetness and that grassy hop lurking in the background.

There’s both  a lightness and a fullness in this, you don’t initially get an uptake of flavour or nuance, and. then suddenly there is it, quite rich, and redolent of something much stronger and more a stout. 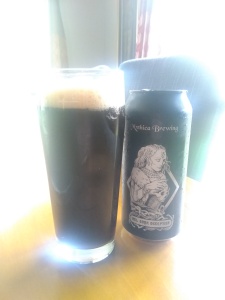 Second time around you get more a sense of the bitterness in this, pricking away, then a softer ride and a delicious roasted malty finish that is Morrish and wants more attention, it’s veering towards a quaffer!

Quaffer is good, but also could be bad and make for a short night out.

The brewers notes seem to spot on and honest when it comes to the low roast on the malts, and there is absolutely a delicious amount of bitterness, oh and I burped and it’s definitely grassy (not gassy, that’s just me)

Now Im not suggesting anything but this really did put me in mind of Alesmith Nut Brown ale.

The more I sit with this the more I like it, it’s deceptively good, deceptively easy to drink and really rewarding where it matters, taste, lingering enjoyment and desirability to drink some more of it.

Which is where my quandary is. This is really nice beer, like really nice beer,  and this is where the problem starts, as it’s not a popular or widely made style and there’s not a lot of baseline in NZ to remember or compare to, and as a stand alone beer it is amazingly good. It’s not the best IPA you can buy, it’s possibly not even the best beer that has roasted malt as an ingredient, but there’s so few Black IPA beers, and when you get one like this you sit back, suck some air in, and think, why is that? When this is as good as it is, and it is, why is that?

I try to enjoy every beer on it’s merits and style, flavours, delivery and all that emotional thing, this alarmingly is very appealing and ticks a lot of boxes for me as being a remarkable and just straight up enjoyable beer.

Surprisingly the highest rated beer in this style is only a 4.07, or a an 8 on the pdubyah-o-meter.

The pdubyah-o-meter rates this as 10 of its things from the thing.  I was wavering between a 9 and 20 for this, remember 9 is ‘great’ and 10 is ‘awesome’ –  When I came up with that list it seemed so simple.  But because I like this, right now,  right now 10 arbitrary things doesn’t make this a 5 from 5 beer on the apps, because they’re apps and this is just me having a beer, a really good beer, a really really good beer that I’d enjoy another of.

Music for this:  ”Modern Vampires of the City by Vampire Weekend the link for the Spotify version I’m playing it on a White Vinyl version from 2013.

The Black India Pale Ale (IPA), also known as Cascadian Dark Ale, is a dark brown to black colored beer with the dryness, hop-forward balance, and flavor characteristics of an American IPA, only darker in color but without strongly roasted or burnt flavors. The flavor of darker malts is gentle and supportive, not a major flavor component. Balance and overall impression of an American or Double IPA with restrained roast similar to the type found in Schwarzbiers. Not as roasty-burnt as American stouts and porters, and with less body and increased smoothness and drinkability. Similarly, the Brown IPA, also known as India Brown Ale, is hoppy, bitter, and moderately strong like an American IPA, but with some caramel, chocolate, toffee, and/or dark fruit malt character as in an American Brown Ale. Retaining the dryish finish and lean body of IPAs, a Brown IPA is a little more flavorful and malty than an American IPA without being sweet or heavy. “Imperial” and “Session” variants are generally closer-related to the base substyle and should be listed with them