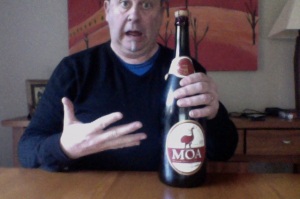 The time has come the walrus said…. to get into this 1.5Litre bottle of Moa Methode. It’s 5.5%ABV and that makes the whole mission about 6 standard drinks and a stagger.

This then is as brewed by the Moa Brewing Company, in the style of a Pilsener, and hails from Blenheim, New Zealand

A German Pilsner – expecting Citrus and Hops. Might have bitten off more than I can chew, but who can resist a bottle that is bigger than you arm!

And I poured myself an ice-cream! a Half and half. So I found a beer that I can pour with a head. At least it settles down with a fine lacing.

I’m sure If I could hold the bottle and glass I could pour a beer with a more acceptable head, as the bottle gets lighter I might get better, however the trade off might be that I get less steady of the hand.

So did I get the citrus hops? Yes I did. I also got a hazy golden pour of beer, with is pleasing to my little eye.

The taste is somewhat coloured by the hops, it has that rasp that you’d expect at a low end of the scale, some people might be put off by it, and I do get an earthy aroma, mostly from the fluffy white head which is still there despite my efforts to drink through it.

I had this with some of  the “Over the Moon – Triple Cream Brie” (which I just notices has a per Kg price of $76.00, I’m in the wrong industry), and I’m pretty much enjoying myself. I should write about the cheese, which is about as close to perfect. I’d sway towards a Camembert normally but challenged myself to a Brie. And you know what, pay a little more for the cheese and enjoy it a lot more.

The pdubyah-o-meter is needed to provide the usual arbitrariness of things, and on the scale this is about 8.5 from 10 arbitrary things. This isn’t an offensive beer, it’s not a front runner beer, it’s a very fine pilsner beer. It carries itself well and it’s consistent in it’s taste. Of all their fine beers If you can find it I recommend the Moa St Josephs, which surprise to no-one is a Belgium style Tripel

I’ve not a lot to compare this too, from my very unreliable memory there are more pale ale and wheat beer types of beer than pilsner beers in the list so far, which is not to say that I’ve never had reason to talk about them, just not here.