Renaissance – Craftsman Chocolate Stout, Brewed by Renaissance Brewing in the style of a Stout, in 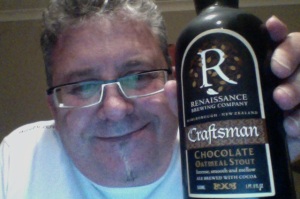 Expecting dark, Expecting Chocolate, and hoping that it pours with head.

It pours like a thick liquid, definitely dark pitch black, and I was kidding myself if I expected a head. I really have to figure this out.

There is no aroma that I can resolve, but the taste is all there. A complete range of chocolate, coffee, a little burnt stuff, lots of bubbles.  Quite subtle, and full of intrigue. There isn’t a long taste to this though, it’s all on the palate and then it’s all gone. Mind you each mouthful is it’s own reward and I’ve got no problem with that.

Arbitrarily though this is about 8 from 10 arbitrary things from an equally arbitrary number. It’s ok, it’s very ok, but it’s sort of muddled in the taste but I’m not going to turn this away it you’re buying. Of it’s kind it’s a winner, if only I could pour it with a head I could have arbitrarily given it higher marks.