Yes, Wanaka Beerworks Oompa Loompa av7.5% ABV beer in a 330ml bottle ( 2 standard drinks )  and it’s brewed by Wanaka Beerworks in the sttyle of a : Spice/Herb/Vegetable beer
and they do that in a place I’ve visited and has a lake – Wanaka, New Zealand. 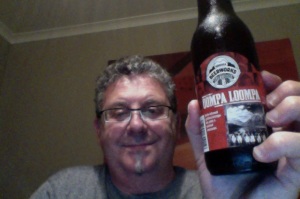 Herb infused golden/orange ale with a wicked character. Wort filtered to 16 plato, 30 IBU bitter hopping, bottle conditioned. It appears to be bottled in Feb 2012, going by the “bottle conditioned, 2 years prior” notice and a drink before Feb 2014

And its a lovely golden coloured, well carbonated beer that delivers with a head of some capacity. An earthy, sweet aroma too.

It is a bit earthy on the tongue too, but with a bit of sour. There are undefined spices or other undertones playing in there, but nothing that is bold enough to make its presence felt in a meaningful way.

I don’t really know. This isn’t a beer that is challenging or edgy, it’s not unpleasant or difficult. Its’ also not one thing or another and I don’t think you could put this in a  compartment of other beers similar. I’m sure I had beers that are similarly different.

The thing is you like to be challenged in a way that either surprises or just makes you smile, not in the way that leaves you wondering what it is that you have.  For a beer with a big-ish alcohol this isn’t a beer that hides that well, then again it appears to be good at hiding many things.

the pdubyah-o-meter says 7 out of 10 things from a thing. Accomplished and I’m not not loving it, I could happily drink another or two, I’d worry about the earthy lingering aroma, I’d dwell on the lovely malt taste, and think that the bitter zing that is has is a bit cheeky, but I wouldn’t arm wrestle you for the last one on the shelf.