The Red Devil they say an Imperial Red Ale –  Brewed by Coronado Brewing Company in the style of an  American Strong Ale, in of all places Coronado, California ‘merica. 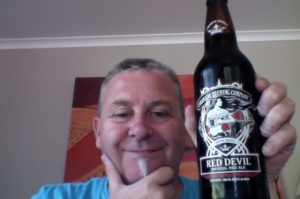 Talking it up Coronado says that The Red Devil is a “double dose of our “Mermaid’s Red Ale”  We simply doubled the ingredients (double the malt, double the hops) and created an award winning Ale. An incredibly balanced and smooth beer with a strong finish.”

Worries me when they say “simply” did something, which might be code-word for this one time we had a new kid and he didn’t pay attention and threw a second helping in the pot, which we had to sell, and it  turned out ok, so we carried on with it.

This is a 8.5% ABV beer in a 650ml (pint) bottle, the attached label says however 10.7% abv which is about 5.5 standard drinks, the plot thickens somewhat. Is there a US and a Foreign ABV rating that I’m not aware of? I’m picking the lower number since it’s on the bottle and in other places. Weirdly though the original Red Devil appears to be a 10.7% ABV beer. Perhaps it’s mellowed in it’s age?

So a mixed start to start. They’ve changed the label and so they may have changed the mix for this and that is what I’m going to go with. Clearly their own information has to be taken as gospel.

So many words without any action then. And I’ve built up an expectation of having my thirst quenched because I’ve been making rib marinades this afternoon, and that’s time in the kitchen, that I have to balance up with a beer. It’s the law.

There is definitely a load of hops on the aroma, and it’s dark dark red on the pour with a faint and disappearing head. It’s a lovely aroma, I could sit here enjoying just that, but I dither. Enjoying it though I get a lovely sweet fruits note too, like soaked raisins.

and it’s initially as pleasant as any beer I’ve drunk for a long time, lovely soft bitter and overtones of a sweet malt and caramel, but it finishes on the bitter. Not that it’s a bad thing, This isn’t a beer that’s going to leave you reaching for an elusive taste that’s on the top of your tongue, it’s fairly well all up front. The caramel is lovely and balanced with the bitterness, which after sitting takes a less dominant position. All in all a bit good.

The pdubyah-o-meter has this at 8.75 things on the scale of the way things work, which isn’t shameful and makes this a beer that I’d reach for if I had my pick of things. So for a simply doubled up on a few ingredients they’ve managed to retain a marvellous balance of tastes, Good work.