Mc Chouffe. That’s it’s name. Brewed by Brasserie d’Achouffe (Moortgat) in the style of a  Belgian Strong Ale and that’s all done in Achouffe, Belgium 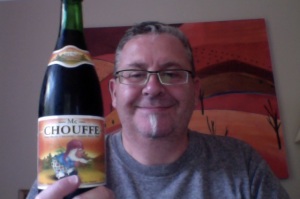 750ml bottle of an 8% ABV dark beer – the Mc CHOUFFE is an unfiltered dark beer, which is re-fermented in the bottle as well as in the keg. Behind its fruity flavour a slight hint of bitterness may be found.

I have an expectation of a toffee coloured beer, with a similar taste, malty, sweet, and fruity.

It’s a lot darker than I expected, but it is a “Brune” beer so that’s not such a surprise, the head is nice foamy and dark, and stays with the beer. There is nothing in the aroma to give away what is to come, if anything it smells of musty yeast.

There is a fair whack of carbonation that surprises the palate and this seems to mask the taste of the beer that you’re drinking. The malt isn’t very strong and you can get the alcahol bitterness of this beer. It’s not wholly unpleasant just surprising.

So where am I at with this. I think like the Le Chouffe this is a beer that isn’t a leader, or setting a mark that others have to get to. It’s a middle of the road offering,  nothing to see here, move along.  This isn’t a beer that I’d share with others, it’s not something that I’d be trying to impress you with. As a beer this lacks the sugary malty front taste, has too much carbonation and doesn’t carry very well to a finish.

However! for an 8% strong ale this is guaffable and could get you into trouble if you let it get carried away with you. The pdubyah-o-meter says 7.5 is a good mark to give, and at that mark there are a lot of beers that I wouldn’t dink in favour of this.

Given the beers of a similar  type that come to mind, such as Duvel, Chimay, Leffe or Maredesous this doesn’t fare as well.  It’s a likeable beer, well made and rounded, but it’s not a “A” student