So onto the Yeastie Boys Golden Perch.  The same Yeastie Boys that brew at Invercargill Brewery this in the style of a  Golden Ale/Blond Ale and they are in Wellington, New Zealand. 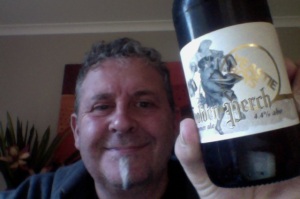 Originally brewed for last year’s Hobbit premiere (Golden Perch reputedly serves the best beer in the Eastfarthing), Golden Perch is an aromatic golden ale featuring ingredients from all across the world. German and British malts form the backbone of the beer, a little bit like the history of our brewing industry, but there is a strong new world influence from the clean American ale yeast and the pungent Nelson Sauvin hops. Golden Perch is a beer with enough flavour to satisfy the most ardent beer geek and remain subtle enough to not scare the everyday drinker.

Have to say the packaging is great with the golden highlights.
There is a nice hoppy spicy burst on opening, it pours a light golden brown with a small but persistent head, and the hops still are at large. It doesn’t seem over carbonated either.
Wow that’s bitter for a low IBU beer, and that’s a nice surprise, quite grassy.  I though at first that this was an all up-front beer, but you’ll find that there is some length to it, and it rewards you eventually.
You might also think this is “thin” as I did, but then in contemplation you realise that this makes it a great session beer. It’s nicely tasty and does have reward for you.
The pdubyah-o-meter says 7.5 things of a thing making it a Good+ beer. Much enjoyment after my day’s exercise and as an entrée in the next relaxing bit of the evening.
This is the sort of beer that you should find on tap in bars, because then I’d go more often. It’s a fine  taste profile and it’s lower ABV value makes it a great beer to enjoy a few times without getting yourself all in trouble.
As a postscript I feel that Yeastie Boys  don’t like criticism or they don’t take it well, or they have an over zealous idea of the quality of their beer, or they are very passionate  about their work as I found out when they took me to task about my not loving unreservedly the “Golden Age of Bloodshed”, which I still think was ok, but just ok not special. Might also have made me , er, windy, the next day.  But I do like them, they’re just very “interactive”, and long may they be so. And I prefer that they are passionate about what they do, because they actually do some things very goodly indeed. And if they sent me a sample pack I’d love them more 🙂