And another of the seemingly endless concoctions from Rogue – this one Rogue HazelNut Brown Nectar.

Brewed by Rogue Ales in the style of a dull as ditch water sounding  Brown Ale and they haven’t moved from Newport, Oregon USA last time I drank a beer from them. 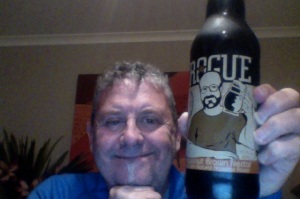 A nutty twist to a traditional European Brown Ale. Dark brown in color with a hazelnut aroma, a rich nutty flavor and a smooth malty finish.

33IBU’s which I would have thought a Porter type bitterness, this a 6%ABV beer, in a US Pint bottle making it 3.1 standard drinks.

So the expectations are set by it’s type. Mildly bitter dark beer, throw in some nuts…. well hazelnut extract to be accurate.

Nothing on opening to suggest anything. It’s dark brown, light thin head, still no aroma, which is weird, or not. It’s sold on taste not smell.

And well, what’s to tell you. Meh comes to mind. I was kind of expecting a Nutella burst sensation. I got thin and lifeless.

Sure there is a hazelnut back note, but if you know it’s there you stop it, it’s not the ‘thing’ the ‘centre stage’

So what have you got really? In essence a mildly bitter dark beer, with a background of “Something” that we know as “Hazelnut”  and only then if you know, I’d not be able to pick it in a blind test if I was being honest.

Disappointed the pdubyah-o-meter says 5. This is pretty average, in my own opinion only. Perhaps I was led on by the rest of the Rogue Gallery. There isn’t much to reflect on with this, it’s a ho-hum so-what kind of beer, it’s just then just a beer. It’s not a terrible beer, it’s just a beer.

Online reviews suggest I’m in a minority in not liking this, then that makes it my taste, I know that Rogue make many a fine beer, and I’m still a fan.