Iceland! Beer! New Zealand! No idea how you join those dots.

Einstök Ölgerð Brewed at Viking Ölgerd of course in the Style of a  Belgian White (Witbier) in the exotic sounding Akureyri, Iceland. 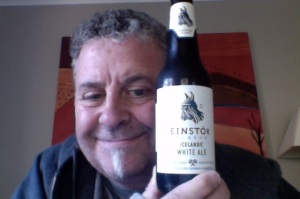 Brewed in the centuries-old Belgian tradition, our White Ale features the complex flavors of the classic witbier, including orange peel and coriander – all brewed with pure Icelandic water that delivers a cool smoothness that is flavorful and refreshingly drinkable.

The flavour is muted too. Bit of orange perhaps, but little else. Visually though head still there, lacing present, it has all the makings of an enjoyable drink.

What isn’t present is an indicator of alcohol, but it isn’t carrying much.

Disappointing, this. I would have liked a stronger carry of flavour, or ideally flavours. The aroma is kind of yeasty, the drink is mostly bubbles in the mouth, there isn’t front or middle note and there is no carry, so I’d describe this as thin,

It does compare to other White beers I’ve had but it’s not a front runner, and it isn’t something that I’d be keen to recommend, apart from, well, Iceland!

An inoffensive beer than, the pdubyah-o-meter randomly thinks it 6, or average, on the arbitrary scale of things, and you’re not missing out if you avoid it.