The now weekly bottle of 1 litre from a tap,  this one A Schipper’s Chinook IPA, Brewed by Schipper’s Beer Company in the style of an India Pale Ale (IPA) allegedly in Newmarket, Auckland, New Zealand, but I’ve been there and I’d be pressed to tell you where it is. 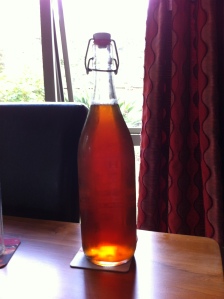 A complex hoppy number, Chinook integrates flavours of ripe pear, fresh croissant, maple syrup, and nuts into one beautifully balanced big-bodied brew. This is the one people have been raving about.

A ‘traditional’ 1 Litre bottle of a  7.3%ABV beer, which is about  5.76 drink units in NZ.  As a bonus I think that this might be about 600 calories. Calories and drinking seem to a pair these days. 600! that’s more than a 3 miles run’s worth! Calories are universal no need to dwell on it.

Instant hopiness bitter on tasting, but there is a fairly decent balance.

Grassy long finish that leaves your mouth knowing it’s had a beer wash through it, and the residual taste is predominantly piney. 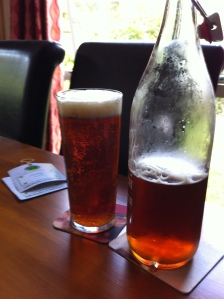 Poured with a decent head that quickly exited left, and there isn’t a lot by way of lacing in this . You might can tell that this looked a lot more carbonated that it actually ended up tasting, if that makes any sense.

But you can see a rich amber orange brown, looks great.

So what else is there in the taste profile that sets this aside or apart from the rest?

I thought I got the ‘pear’ initially but I’m easily led. There isn’t anything in this that is surprising, off-putting or weird.

It’s just a middle of the road fairly decent beer. Which, to be fair, isn’t a bad, or dangerous place to be.

So the pdubyah-o-meter, terribly inconsistent and arbitrary rates this a 7 which is good.

As this warms the over-riding taste moves more to grass than pine (he said expertly), and you’re left trying to figure out where the first pint went, and if it’s really 7.3% because there isn’t anything to give that away, and you burp, and then drink some more. None of that resinousness the tartness that you sometimes get, it’s just middling.

A really decent easy to drink beer with no threats or barriers to enjoyment. But as always you want something more or memorable, and I’m not sure that this has the wow factor, but it is jolly nice nethertheless. No wallflower, but not a pole-dancer either, he said throwing in some casual sexism.

Chinook Flavor Profile: Chinook is the hop that smells and tastes the most like you would imagine – a dank piney forest. These hops are known to have a very spicy finish, too, and because of the very high alpha acid levels it makes for the perfect bittering component of a beer. Many brewers will tell you to watch out, because they can easily be overused.