So, number 300, and a beer I have been so looking forward to. The last time I had this was at Beer #34. I liked it then. This is the latest year release I have an Epic Epicurean Coffee & Fig Oatmeal Stout – 2013.

Toasted Philippine Coconut. Aroma of fresh coffee with a hint of citrus, followed up by roasted malt character,toasted coconut and a rich dark fruit finish. 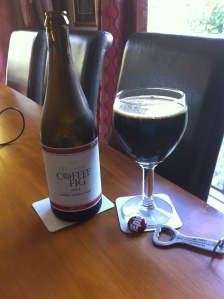 Lots of coffee and chocolate notes on opening, as it did with a meer “pfft”..  Pours a dark black, as you’d expect but the head disappears.  Really strong coffee aroma, like cold drip coffee,  and you pick the alcohol note, and some chocolates.

My mouth is watering just smelling this. But it is beer #300 and so forgive me.

Lots of things going all, all mostly good. Nice carbonation, lovely wash of the coffee taste, nicely and subtly bitter, and gently sweet.

This isn’t a “thick” beer and there is no “full” mouthfeel. This is just a nice taste, not dramatic or challenging, and there isn’t any stand out thing to take your attention in a direction that it shouldn’t go. You can easily drink this without worrying if you’re going to enjoy it is what i actually mean, without having to pause to dissect this or that taste.

Of course I may be drinking this too cold which is muting a few of the flavours, and so I hope this develops as it sits.

Which is going to be hard, as this is quaffable and easily drunk, I’m sure they mean for it to be a celebration beer, after all it’s in a wine bottle, but there is me, the music, and one glass. I’m not unhappy with that.

More of the coffee is present, or perhaps more present, and I’m not unhappy with that.

Summarising this then:  Lovely coffee, just like the result from cold-drip, full of flavour, a bit earthy and pungent, sweetness from the other things, neither of which I can pick individually, who’s surprised, and nicely carbonated. Great aroma, easy drinking. A treat.

The pdubyah-o-meter, which is just a random bit of thing, says that like the 2012 version this a 9, a great beer. There are still bottles available, which makes me think they went short last time and doubled up. Not always a good thing, in this case though it might work out for me, I wonder if I could put one in a cool dark place for next year?

Dinner tonight I believe I’m in charge of the barbecue again, this time with lamb, whist MrsPbudyah does all the real cooking.

Music for this was the improbably named Bombay Bicycle Club