Mother’s Bruin. Pun intended. Probably. 2013 vintage. I have no idea if they’ve made this before, but they may be planning to make this again.

Brewed by Pink Elephant in the enigmatic style of: Old Ale and that’s in a fantastic part of the country – Blenheim, Malborough, New Zealand. 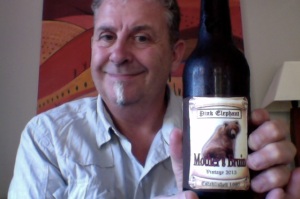 Mothers Bruin is a Strong Ale. This secret ingredient is honey. It features a butter/toffee aroma, creamy mouth feel, with toffee and caramel (and some fruity notes

This Ale’s secret ingredient is the honey which is produced from the honey dew collected from the bush clad Canterbury hills. 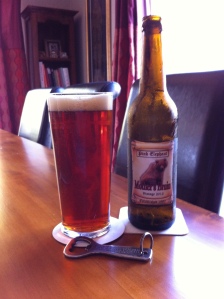 Lots of yeast aroma on opening, Pours a chestnut brown traditional beer colour, with a smallish but firm and persistent head.

Aroma settles to something akin to a honey thing.

Firstly its very rich, and that’d be the honey, although it’s not a honey taste, or is it. Nice and rounded smooth sweetness.

The bitterness isn’t intense, and the carbonation is soft.

The lead in aroma is inviting.

I’m a bit impressed with this from Pink Elephant. I’m not sure I’ve been their biggest fan in the past. Which is a poor assumption based on one poor experience in the past. So I’ll get to that and make some more effort. Consider myself told.

So I had a low expectation and now I have a high regard. But let’s not get carried away. This is a sweet drinking beer. It has a foolish mouthfeel and a lovely carry but it is a sweet beer.

I’m tempted to leave it to warm to see what happens.

Which turns it into an experience akin to toffee or treacle, but still way up in the sweet zone of taste.

The pdubyah-o-meter is easily swayed by the easily drinkability and seductive sweetness that appeals. There is no indication at all that you’re getting a bit squiffy by quaffing this, there is no alcohol apparent. A lovely long drink with some bitterness at the edge, the soft middle and a lovely finish. By far the best honey beer I’ve had, and I’ve had so few to make that a bit of a nonsense statement. I would though go as far as to say 9 for this, complete with a money back caveat that if you have a sweet tooth then this should appeal to you as it’s nearly but not quite toffee beer, and that really would be a thing.

Old Ale is a simple enough style to figure out. At least, once you understand that there are three or four beer styles called Old Ale. The first is the best known – the strong dark Old Peculier style. The second type of Old Ale is a blended dark ale. At least one of the beers comprising the blend will be aged for a couple of years in wood casks. The third version of Old Ale is a form of mild – a low-gravity dark ale. Another version of Old Ale is closely related to the first. For me, these are robustly malty beers, akin to a top-fermented version of a doppelbock.