So the last of the christmas beers. A Renaissance Voyager India Pale Ale.

Brewed by Renaissance Brewing in the style of an India Pale Ale (IPA) and they are still in Blenheim, New Zealand 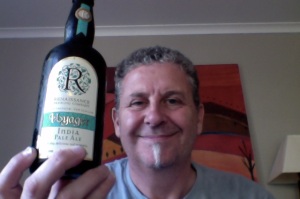 Designed first and foremost to be served on beer engines and in the future as a cask or bottle conditioned ale, this beer is inspired by the boldly hoppy Ales of old that were exported from Britain to the furthest corners of her vast and glorious empire, Voyager I.P.A. is a rich satisfying Ale with an emphatic hop bite.

It is brewed with pale ale malt from Canterbury, and small additions of European specialty malts to yield a malt base on which to build its hop edifice.

We generously hop it with two Kiwi hop varieties for bitterness then finish it with Fuggles (as a nod to I.P.A.’s British origin) and New Zealand bred Riwaka hops for a spicy floral finish.

Burst of hop grassiness on opening 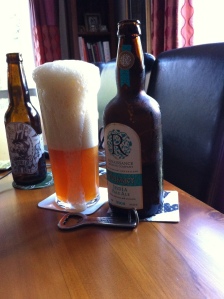 Pours, well, like a volcano. It’s really really really over carbonated and hasn’t settled or looks like settling. What’s with that?

Colour of the beer you can see it orange golden, the head is 2/3 of the glass and fully aerated and bubbles. It’s just bubbles. Who wants to drink bubbles, and not the champagne ones either, I like those.

So I get sourness, and oliness as taste sensations. The Sourness I can put to a hop characteristic though. The beer  is cloudy and doesn’t settle, it’s like there is a party going on in the glass for bubbles only.

I don’t like the sourness, but that’s not it’s not a character of the beer, I’m sure it is, it’s not one that floats my boat in this instance, because you can also pick grassiness in the tastes.

The pdubyah-o-meter unconvinced says 5 – making this arbitrarily average on the scale of arbitrary things.

I wanted to like this more, which seems a common thing, but it fails to deliver, for me.  I’m going to have to check but now I think Renaissance are a bit up and down, hit and miss, or more precisely unreliable as a choice of beer in a panic, and that’s not a good thing.

Spotify chose for me “Interpol”  the band, and that’s ok with me.