Brewdog Punk IPA.  I’ve seen this around and abouts and it’s time I tried it.

Brewed by BrewDog in the style of an India Pale Ale (IPA) and they are in Ellon, Aberdeenshire, Scotland

This fresh, full flavour natural beer is our tribute to the classic IPAs of yester-year. The post modern twist is the addition of amazing fruity hops giving an explosion of tropical fruit flavours and a sharp bitter finish. 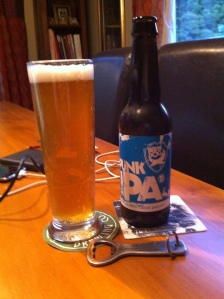 Sweet hoppy atoms on opening. Pours a lot more pale than I excepted for no reason, nice head. Keeps the hop aroma

A full set of flavours on the tongue, nicely bitter, some sweetness and a nice finish.

But then it’s also a little lacking in a strong carry note. I noticed this in the last few beers. There are some strong in front and end notes, but the middle is missing and thin.

You get the intent of the hops in this, they should be dialled up a bit.

The pdubuyah-o-meter weighs in with a 7 arbitrary things on the scale of things. Which isn’t bad in a crowded field of very good beers.

Musically I enjoyed this with Girls Against Boys, this is – In Like Flynn – Amsterdam 2013