This is Brewed by Backus y Johnston (SABMiller) in thes tyle of a Pale Lager and they are in Lima, Peru 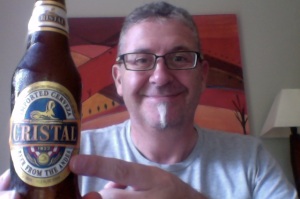 Brewed since 1921, Cristal is Peru’s No. 1 selling beer, combining a light-bodied liquid with strong Andean imagery. It has been the No. 1 selling U.S. import from South America over the last eight years, primarily appealing to the approximately one million Peruvian consumers in the U.S.

If nothing it’s another cap in the beer jar (ask me about it later).. 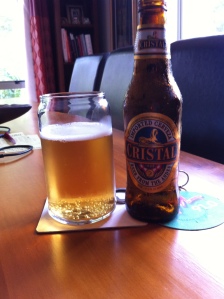 That sourish malty aroma, nothing spectacular, pours pale yellow, and has a thin and persistent head.  Aroma is neither here nor there, and might remind you of stale beer.

Taste, is neutral, a little sweet carry on a nicely carbonated beer. Malty lager, typical of the type.  Not going to get you into poetic adoration, at least not about the beer, I’m sure more than one lovelorn episode has been enacted when a few of these have passed the lips.

This then is nothing offensive, nothing spectacular and nothing to wax lyrical about. But it is better than some pale lagers that you could pick up, really it is. It’s not over-worked and does’t have any metallic edges that I could detect.

So the pdubyah-o-meter rates this a competent 7 on the beer scale because of what it delivers, a refreshing, easy drinking beer that I actually enjoyed.

The colour of pale lager ranges from light bronze to nearly transparent and the alcohol anywhere from 4-6%. Adjunct usage may be quite high, though in some cases the beer is all-malt. Carbonation is typically forced, though not always. One thing that doesnt vary is that neither the malt nor the hops make much of an impression on the palate. These beers are brewed for minimum character, though faint traces of hop or malt may show through. More likely though is that adjuncts like corn will show through, or youll find notes of higher alcohols (fuel notes) due to the use of high-gravity brewing. The body will be thin and watery, and the finish is typically non-existent.