This is brewed for 8 Wired Brewing . Brewed at Renaissance Brewing this in the style of a Session IPA and they are in Blenheim, New Zealand. 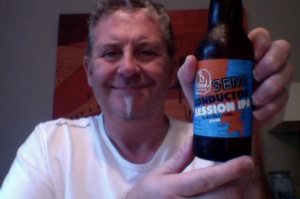 IPAs are great but sometimes you just don’t want the amount of alcohol that comes with most of the good ones. In this spirit we brewed Semiconductor. an IPA designed to be drunk by the gallon, if you are that thirsty.

Certainly has a hop aroma on opening, and a noticeable hiss, aroma has some yeastiness too.

Pour is  a really pale yellow, not what I expected, and a head that appears to be persistent in the glass. Nice hop aroma.

Lots of grass in a burst, and a reasonable length but not a long carry, so you taste this and notice this, but there is no second or longing taste on the tongue, or dryness.

So what do you got? An IPA that hints at hops and bitterness, delivers a punch of grass in the front and that is it and the bitterness in one.

So the semi is really the indication that you’re not going to get a full. But sometimes that could be a thing, you don’t want that dry finish that makes you regret drinking a beer, but you want a bitterness that keeps you interested and engaged with what you are drinking.

Leaves a nice lading in the glass too, sometimes that’s important.

The pdubyah-o-meter then rates this as an accomplished 7 better than good beer. Sadly though it’s way more expensive than stronger lager beer types in 12 packs, so unless there is a method of getting the price point down to something more reasonable then this is going to be a small volume beer that you might take to a party or gathering knowing you can have perhaps 3 and enjoy your night out. No way you could afford to “session” on this, as a bang for buck proposal unless there was a lot of talking and very little drinking involved.

Perhaps it could be be my idea of “Session” that is wrong, my though was “big night in with the beer, for hours”, and for that reason the grinch in me hates this, on price.

The drinker in me comparing this to a domestic beer though loves it, it’s lower in alcohol, better taste profile and more enjoyable. Just can’t afford it.

I enjoyed the full conductor 8 on the scale of things, by the way, I think I linked to it at the bottom, it was a lot of beers ago, that I drank it, not when I linked it 🙂