No doubting what style this is then.

Brewed by Meantime in the Style of an  India Pale Ale (IPA), and from my home city of  London, England.

India Pale Ale is the beer that sustained the British Raj – it did not just survive the passage to India, it matured to perfection on the long voyage. Original IPA was heavily hopped – up to 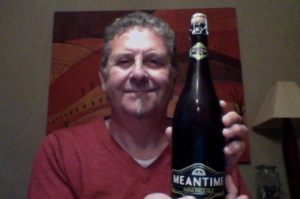 twice as much as domestic beers – and so Meantime use plenty of Kent Fuggles and Goldings to help re-create the flavours of the world’s first great pale beer style.

Bottle conditioned.  Meantime are Britain’s only brewers of authentic India Pale Ale. Small batch production allows us to apply the attention to detail and care we require to produce an authentic IPA especially for you. Pound upon pound of Fuggles & Goldings hops are needed to enable us to achieve the dry hopping rates necessary to recreate this great beer style. Enjoy with hot foods and spicy friends, or vice versa.

Whilst your judging me I brought myself a Spiegelau IPA Glass, which is like jumping the shark, and moves me on from a beer drinker to a beer . Because I’m a rebel though I’l probably use it for just beer of any kind. 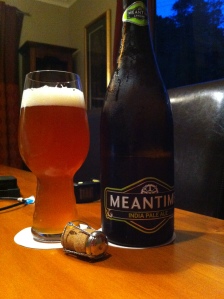 So the excitement of opening a champagne bottle of beer…

Not much by way of aroma on opening this, the familiar british musty hops.

Pours a lot more red/orange and cloudier than you’d expect and probably because the glass shape has a fantastic firm and fluffy head.

Hard to pick what the aroma really is, citrus without being so.

Earthy bitterness, with a slight tang of orange peel,quite an abrupt finish, not a lot of carry, but it’s quite warm to drink and not at all lop sided.

Pretty easy drinking to be honest with no sharp edges that distract. The malt balance is nice. As it gets slightly warmer in the glass because this is pretty good quaffing beer, there are deeper caramel tones in it, if you want to get all wordy.

The pdubyah-o-neter rates this as a 7.5  on it’s wheel of fortune of randomness. Thursday night has been enriched by this nice beer from England, which let’s be fair, hasn’t always been the case in my drinking, and this goes some way to making me smile about British beers again.

Got to say that the clever design of the glass means that as you get nearer the end the beer swishes around in the stem and in some magic way refreshes the head, I’m like a kid in a toy shop!

Listening to Jack White, this is  from the Blunderbuss Album.