Brewed at De Proefbrouwerij in the style of a Belgian Strong Ale  from Copenhagen, Denmark

This beer was brewed especially for a Mikkeller and Three Floyds dinner at a restaurant named Mielcke & Hurtigkarl (try and pronounce it, I dare you!) in Copenhagen. It was aged in Château d’Yquem barrels,  Château d’Yquem being the world’s most famous (and probably the most expensive, too) dessert wine.

This is possibly the most expensive beer I’ve drunk, and I know there are more expensive to acquire beers out there, but this sets a new personal benchmark. In NZ$ this was $30, for 375ml. This is about 261 calories.

This isn’t universally liked though. I’m about to find out.

Dark copper pour, with a lively and persistent head, the sour aroma leaves quickly, although not completely. 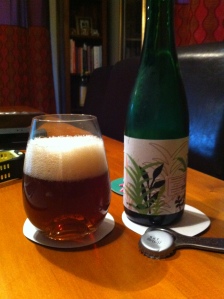 And Gosh!, that’s interesting. A lot of sweetness, you might expect that, and intense depth, with a tip of tongue bitterness.

I’m not saying this because I’m compelled by cost to do so, but this is pretty nice drinking. Plus it’s also a style that I like anyway.

The bitterness is spot on, for me, and the whole thing is well balances and sits well in the glass and in the mouth, I’m getting a little poetic.

As it warms the aroma gathers some fruits and other sweets around it.

The pdubyah-o-meter rates this as 9 a of its things from the thing. It lacks a depth of caramel in the palate that would make this a spectacular beer. In and of itself it is really good and I’ve found that I drank it too quickly.