From the Sublime to the ridiculous – Rogue Beard Beer – I wasn’t thinking straight.

Brewed by Rogue Ales in what might might be for me the early evening style of a: Belgian Ale, and Rogue are in Newport, Oregon USA

25 IBU’s  (lower than an English Bitter, or Stout and just over the lower Porter number, a Pilsner should be around 25) and 5.6 ABV, 650ml bottle, 168 calories serve, 2.9 standard drink units, all sounds normal until you read about the origin of the yeast…. 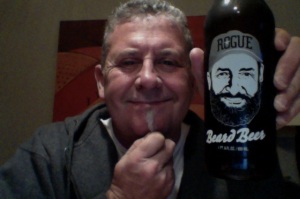 t’s here! Our latest brew Dedicated to Beards, Beard Beer is brewed with a yeast created from Brewmaster John Maier’s Beard. No Need to freak out, Brewers have used wild yeasts in beer making for centuries. John has had the same Old Growth Beard since 1983 and for over 15,000 brews, so it is no great suprise that a natural yeast ideal for brewing was discovered in his beard.

Sounds like an art project! And not one that everyone liked. 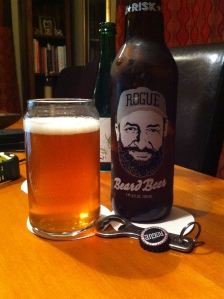 Light orange poor with a small head that appears persistent. On a bit of a run with heads.

Familiar sour note that you’d expect from Belgium Ales. Light bitterness and nice sweetness on tasting this, I was mildly surprised and pleased.

This is a bit pleasing to the taste, even if it doesn’t have a strong backbone of malt to carry it. Bitter upfront, nice wash over the tongue, and a reasonable finish.

But it is a bit thin of body and short in the ultimate carry.

You could easy session on this easy quaffing beer without any drama, it’s let down is the lack of head and lacing. It’s low-ish ABV means that you’d be able to tell all sorts of lies without forgetting where you are.

The pdubyah-o-meter rates this as 8 a of its things from the thing. I would get this again for the fridge, it’s priced well, drinks well and well it made me smile. Easy drinking I’d have no problems sharing this or recommending it as a well decent beer that has bitterness and flavours without challenge and frowning. A beer for everyman?, perhaps not, but you could do so much worse.

Of course this reminded me of ZZ Top

Belgian-style ales seldom fit neatly into classic beer styles, but this category represents those “session” ales (in Belgium this means under 7% abv!) that do not fit other categories. Colour ranges from golden to deep amber, with the occasional example coming in darker. Body tends to be light to medium, with a wide range of hop and malt levels. Yeastiness and acidity may also be present.