Brewed by Rogue Ales this is in the Style of an American Pale Ale – and they are in Newport, Oregon USA ‘merica!

Juniper Pale Ale: the new package for Yellow Snow Ale (winter 2004/2005). While the recipe (a pale ale infused with whole juniper berries) on the label remain the same, the name and label are new for 2005. Juniper Pale Ale is available in the classic 22-ounce bottle and on draft. Also known as Pale Rain. Measurements: 13 degrees Plato, IBU 34, Apparent Attenuation 77, Lovibond 3.2.

A pale ale, saffron in color with a smooth malt balance, floral aroma with a dry spicy finish from whole juniper berries.

The Turkey was named the official bird of the Rogue Nation in August 2007. To commemorate the momentous occasion, Rogue Juniper Pale Ale was dedicated to “the turkey in each of us.” An axe and the dedication have been added to the serigraphed 22oz bottle and Juniper Pale Ale tap stickers.

The Pilgrims were ale drinkers and most likely enjoyed beer at the first Thanksgiving. Juniper Pale Ale, like all Rogue products preserves water by using more ingredients, contains no chemicals, additives or preservatives and uses Free Range Coastal Water.

“When I read about the evils of drinking, I gave up reading”
– Paul Hornung

HA! he said, I’ve heard all that before, what does a Juniper berry taste like anyway. 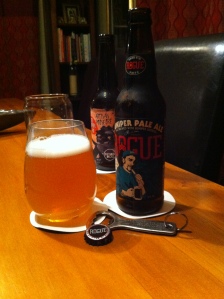 Pours really pale yellow, but cloudy with a reasonable head, aroma does not move so much, its bait earthy almost mushrooms. I might be hallucinating though.

For me it’s not pleasant, I’m not sure why.

And it’s very sour in a sour way, not in a way that is designed, surely? Conflicted much?

It’s unusual for me not to like a Rogue Ale, and I’ve drunk enough Pale Ale types to know if I like it as a style. or not, so I feel at odds over this. I couldn’t get over the ‘shroom aroma that plagued me, once I had it in my head it was all over rover.

The pdubyah-o-meter rates this as 7 a of its things from the thing. Just. There is nothing intrinsically wrong with this, it’s refreshing, looks ok, carries a flavour and has a decent length in the palate.  This time and in this place it’s not for me.

Am I enjoying it? Sadly I’m not, but I want to.
Would I have another? Not Tonight, as someone once famously may noir had said to Josephine
Would I share with a friend on a porch and set the world to rights? Not Tonight, oh wait I’ve already used that.

MrsPdubyah moaned about the last musics so I put this on – Paloma Faith – and this is “Only Love Can Hurt Like This” – trust me you should be able to shimmy and sing along quite easily kit’s very catchy.