Get in! Bear Republic Café Racer 15.

Brewed by Bear Republic Brewing Company in the style of an  Imperial/Double IPA and that sounds like it should be from Healdsburg, California USA 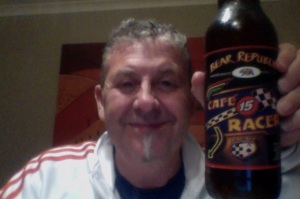 Café Racer 15™ features aromas of bright citrus and resinous pine from the generous use of Citra, Amarillo, Cascade and Chinook hops which are complimented by a dry malt finish. The result is a high revving Double IPA that is loud and assertive, much like the rebellious street racers who inspired it. Never ride alone…

I’ve been out and about today for some average beer, came home to an empty house, and sat with this. I make it sound so much worse that it was.

Thats intriguing on opening, a bit of (lot)  of grass but it’s really muted and hidden by a sweet, I may have my nose too close to the bottle….

Such a nice pour, with that lovely her golden brown yellow orange and a lovely head of fluffiness, Lots of aroma of orange and ‘something else’ sweet.

Hang on wait that a little bit intense. That’s not a gentle beer there so whoa that pony.

Lots of the orange, and a real sense of alcohol astringent all in the front, is that right?

There is a lot of aroma and an intense mouthful of orange/citrus and bitterness that you could pick as grass.

I don’t know that this is however a good thing,

Sometimes you want a bit of a run-up and launch into this, and that might only take a small sip but this is IN YOUR FACE!!!!

I know what this is trying to be or do, but it’s not that clever or good at it. Honestly it’s like the loud person in a crowd. Accepted but not liked. I don’t think it’s clever or interesting and it’s somewhat annoying.

I might trick myself into thinking that I know what this is trying to be, I with I did, it’s a thing, and it’ll have it’s fans, however I’m not one of them.

I’ve had some, for me and the way I taste them, average beers, and this is one of those. Came with a hiss and roar like a 50 cent  firework and ended a squibb.

The pdubyah-o-meter rates this as 6 a of its things from the thing. <sadface>