One of 3 beers from this brewer – Bach Brewing Ltd This is Brewed at Steam Brewing Company and this one is in the style: of and  India Pale Ale (IPA) and they are in Auckland, New Zealand 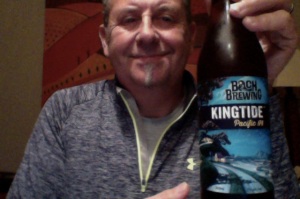 At the heart of is our passion for craft beer and our love for the Kiwi Bach…escape, freedom, simplicity and time together with family and friends.
Kingtide Pacific IPA is brewed with a caravan full of five character hops from the NZ and US coasts of the Pacific Ocean – Riwaka, Motueka, Amarillo, Chinook and Citra.

The 3rd of the 3, this being the newest of them.

I brought this, and the other two only because the sales rep was in the bottle store at the time, I’ve kind of been looking past them before that, and I shouldn’t do that really. Or perhaps I do it because they’re unknown quantity and therefor a gamble.

I was told off for using too many glasses, but for this I get to use the pony IPA glass, well it seems like the thing that you should be drinking an IPA from.

I can smell the dinner coming together, I made bread today, and I made butter, the former was ok the latter needs a bit of work. but the wafting garlic is mouthwatering. To complete the story it’s pork chop, pan fried potatoes in herb butter and garlic and a salad. Oh and the fresh bread if there is any left after the grazing that’s been going on.

This has a much cleaner hop aroma that the other two.

Pours what seems to be a darker golden orange with a decent fluffy head. Aroma is the same familiar IPA thing going on. Where you get a bit of grass, orange and other things.

Which translates into a really decent sup of beer.

This really is a full and to the edge bitter beer. There isn’t much wriggle room with this, it’s a bitter beer.

Where the Pale Ale was all big and bold this really is all that and more, except that the bitterness is much more pronounced and the carry is a bit better. Nice florals and all that on the finish too, around this is a nice experience.

The pdubyah-o-meter rates this as a rare and unusual 10 a of its things from the thing. I am a bit in love with this as it gets warmer, lots of bitter, lots of the nice length of taste, the grass the floras, I wish I’d really brought two or more. Twice.

Still doing the same album, its an anniversary thing – Oasis – and so (again) because I’m lazy – from the album called Definitely Maybe – this is just a bit of it – the track – Rock N Roll Star