Home alone and so it’s comfort beer (I hope) and one that’s been in the fridge a while – the Pink Elephant Trumpet – 2013 vintage – of course Brewed by Pink Elephant this one in the style of a  Barley Wine and they are based in a nice part of the country – Blenheim, Malborough, New Zealand

Trumpet is a Barley Wine. This is lovely when fresh as the hop additions areprominent with an aroma of mixed fruit leathers. Has some caramel, Honey, vanilla and dried apricot flavours.It may be cellared for many years and will lead to an amazingly complex ale Vertical tastings are possible with this Ale 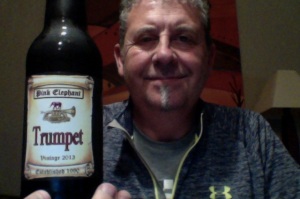 A hoppy and malty Barley Wine style. This is lovely when fresh as the hop additions are prominent. However, it may be cellared for many years and will lead to an amazingly complex ale as the many ingredients blend together to give a truly classic Barley Wine

Poured a slightly dark golden with a weak almost white head. Aroma of mixed fruit leather I used to get in my lunchbox at school, some stale caramel and honey, quite sweet but still pleasant. Thin mouthful for the abv. lots of weird cola, vanilla and dried apricot. so many fruits come to mind when drinking this stuff its incredible. The finish is a touch warming and shows more stonefruit. good stuff.

So a lot going on perhaps.  But the music is mellow and I’m home alone, which beggars the questions as to why the music isn’t louder. It will be later.

Don’t know that the 2013 tag will make any difference. 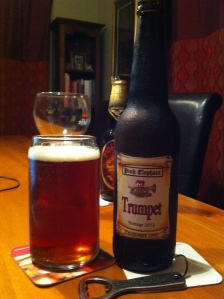 Fruity and dark chocolate on opening this which is a nice start, didn’t seem over carbonated either, it’s quite a pleasing smell I might get around to pouring in a minute.

Dark treacle colour on the pour, looks really great, all chestnut and rich orange, with a nice smallish head that seems lively though. The nice aroma doesn’t carry through though, except for the raisin thing.

Oh wow that’s another beer with a really full and interactive mouthfeel. Lot of sweetness, lots of richness,  nice muted bitterness, I’ve found another beer that seems to tick my boxes.

Nice to drink then this really needs to be had with something to kick with it like blue cheese or something to temper the tartness that begins to settle with it warming.

I realise though that I’ve drunk a goodly amount before I realised that, and I don’t have the foresight to have got the cheese thing going on. It’s hard with this home alone thing.

The pdubyah-o-meter rates this as 8.5 a of its things from the thing. I liked the initial aroma which didn’t make it into the glass. I love the sweetness and the way that it’s easy to pick the raisins and fruits in this, but there is a tartness that creeps in giving it a bit of an edge.

It is however a cracking beer to have on a chilly night and would be best mates with some cheese or something to balance it up.

Tonight thanks to a  recommend from my little brother, music is from  Tindersticks – this song “Sweet Memory”  – Indie/Chamber Pop is how they’re described. I’m listening and I will be judging.