Poshed up name this one – Garage Project – Château Aro.

Brewed by Garage Project in the style that could be called Fruit Beer and they are in the windiest of Wellington, New Zealand

‘Never mix grape and grain’ – we’re breaking the cardinal rule again for our second grape harvest beer. Château Aro, a dark rubescent lager, conditioned on the freshly crushed juice and skins of pinot noir grapes from the award winning Escarpment Winery. And the result of this unholy union? Rich, complex and surprising. Remember, beer then wine, you’ll be fine.

Indeed, they seem to best at the beers at the edge of the boundary rather than the middle,  I’m hoping that this is nearer the edge.

Beer yeasts are the aroma I get.  Pours really red and without a lot of head. Really then get the full red wine effect. 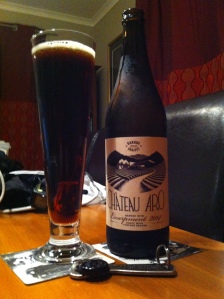 The taste? Well there is a confusion of things and they’re all trying to get you’re attention please!

The dryness that you get from the tannin of Red Wine is there, I get that, and then there is a bunch of fruit things.  Which is all well and good on a well carbonated and cold beer.

What’s the go then? Edgy is ok, but is this a thing?  Does it work? Hard to say really.

Of course it’s not hard to say, the first measure has to be “what’s it like”  to which my answer is a solid…. well… it started off with promise, like it was going to carry the red wine Pinot notes along with it, but I’ve got to say that I’m not feeling it.

It did start with a lot of promise but does not seem to have a lot of legs and might have petered out  bit. Dammit.

But it is a nicely mellow and enjoyable beer that is neither sharp or bitter, neither is it too sweet or cloying.  I don’t know what a wine drinker would think of this.

The pdubyah-o-meter rates this as 8 a of its things from the thing. Overall it’s enjoyable and makes a really pleasing change to over-hopped and over-hyped beers that I could be drinking, and you know I have those in the beer  fridge.

Throwback Saturday, and weird being weird  I’m listening to amongst other things the track “Nag Nag Nag” the band is of course  Cabaret Voltaire.