I had a plan in my head, but then I thought I’d drink this – Thornbridge Wild Raven, because well, Black IPA

Raven or Wild Raven is brewed by Thornbridge  and that’s in the style that is  Black IPA and they are in Bakewell, England

Originally released a for the Chesterfield CAMRA festival. 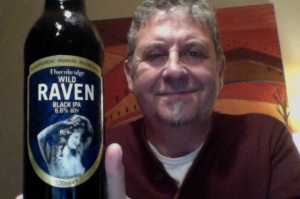 Renamed as Wild Raven in 2013 due to another beer going by the name “Raven” elsewhere
The recipe for the brew came from James Kemp, who joined the team a few months ago. Previously crowned the New Zealand Home Brewing Champion in 2008 and winner of a Liberty Award, Kemp used Maris Otter, Black Patent and Chocolate malt along with Nelson Sauvin, Centennial and Sorachi hops.
The beer, called Raven, has bitterness and hop character and plenty of malt flavours to give it complexity.

Another of those beers that gets elevated from home to commercial.

On opening then a dark aroma like chocolate or coffee. 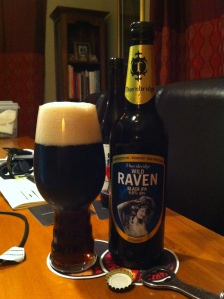 Pours less dark than I thought it might, and it has a really excitable head of light white fluffy. Aroma moves to more hops than chocolate.

Then there is the taste, it’s like weak cold coffee.

Nothing at all like I expected, and there really isn’t al to to say about this as a beer at the moment. I’m going to sit and consider and try to unravel this,  because there must be something in it.

There is some hop dryness in this

Holy heck I drank the whole thing, the all of it.  So it’s very drinkable and quaffing comes easy to this, means that this is soft on palate notes, they’re all dialled down a lot, and you drink because at that low level they tick a box without lighting the light. Which is both good and bad. Clearly the taste lights your dial, and at the same time you’re triggered into quaffing which means that in quick order you’re all over the show like a father-in-law at a wedding party dance.

There is some sweetness in this, in the drinking, but it really is, like I said. a bit like weak cold coffee, which in and of itself isn’t so bad.

There was a break in proceedings for some dinner. Yet and still this beer didn’t get worse or better, it didn’t make dinner either better or worse, it was just cold and warm.

The pdubyah-o-meter rates this as 5 a of its things from the thing. Either I don’t get it, or it wasn’t to be gotten. I’ve had Black IPA before and this just wasn’t all that at all. Kind of disappointed.

MrsPhil took over the musics and we ended up with :Barry White : so  “You Are The First, My Last, My Everything” included

Worth a quick dance before dinner…