Brewed by Townshend Brewery as their take on the  Belgian Ale style and they are in Upper Moutere, New Zealand.

Brewers note on their website has this though as a Pale Ale, despite the label saying otherwise. One of those things. 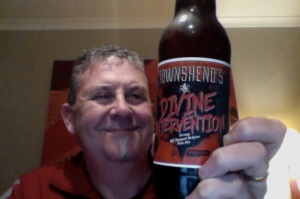 A strong and heavily New Zealand hopped Belgian Pale Ale. This is a collaboration series beer with Kieran Haslett Moores’ brewing arm Southstar Brewing Co. The beer is named in loving memory of Jeff Hennaman from Slayer who died last year. (We are both huge Slayer fans.)

More hops on the nose on opening that I would have thought, and sweetness too. 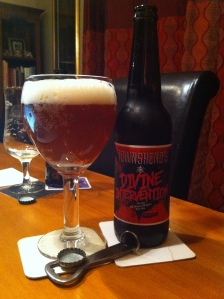 There is an awful lot of aromas in the glass, bubble gum,  spice, and by heck this is a noisy beer all pops and crackle!! Nice warm amber/chestnut poor with a lively head, but persistent, looks nice in the glass.

Aromas are a real mixed bag, mostly sweet, caramel and that weird one you can’t name.

That is an interesting profile of caramel sweet and underlying sourness, which weirdly works in that same way a sour-snake candy does.

Lots of things to pick over in drinking this it’s a real mishmash of things.

But so far so good. Initially I really like this for the aromas and the whoosh of sweetness and layers.

But it kind of falls away and leaves you with a beer that is marked by it’s sour profile.  That isn’t to say that it isn’t a bad thing it just changed beer in the middle is all.

The pdubyah-o-meter rates this as 7 a of its things from the thing. That makes is  good” which I think overall and in and of itself is about it. I think the last Belgium Ale I had was the Rogue Beard Beer, and that was less ABV and a beer that i would buy again.

To recall from the last beer I was drinking – I was asked about “The Clean” and so I’ve been having a listen, and to show it’s not all cut and paste, this is “At the Bottom”

The Clean are an influential indie rock band that formed in Dunedin, New Zealand in 1978, and have been described as the most influential band to come from the Flying Nun label, whose repertoire included many major proponents of the “Dunedin Sound“

A bit rough and raw, but of a style that holds no pretence, lyrics are a range of great to schoolyard poetry, sound though despite the production remains true to itself.

You’ll find these on Spotify and probably Pandora if you have a look and  of course iTunes.

Belgian-style ales seldom fit neatly into classic beer styles, but this category represents those “session” ales (in Belgium this means under 7% abv!) that do not fit other categories. Colour ranges from golden to deep amber, with the occasional example coming in darker. Body tends to be light to medium, with a wide range of hop and malt levels. Yeastiness and acidity may also be present.