Another beer in a can. Two in a row!, this one Baylands Brewery and their Woodrows Veto IPA

Brewed by Baylands Brewery this on in the style that is  American Pale Ale or IPA as it says on the tin. They are in Wellington, New Zealand 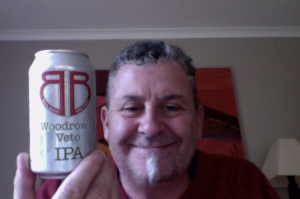 Beer in cans are becoming more common, and a few more are appearing as the way brewers want to deliver their beer.

As always I’m prepared to give it a go and remain open minded.

A new to be brewer, a local one, so that’s nice.

Wow you can smell the hoppiness in this immediacy on opening as it does with a firm crack! 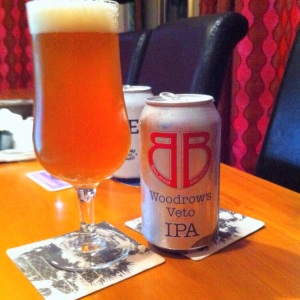 Cloudy poor, but a decent amber/oraage, with a lovely head, aroma has carried to the glass which is nice.

At this point I’m thinking the Garage Project Beer I’d drink from the can, this strongly hopped IPA I’m not sure I could or would be comfortable with. Perhaps I’m just can shy.

This is a really pleasant and well conceived IPA beer, I’m really enjoying it.

Which brings me to a problem. The price.  It’s a bit steep. A subject I’ve not broached before because well beer is what it’s worth paying for. I wouldn’t have brought this in a 330ml bottle, and blushed a little at the price of a can. Probably more towards my inability to calculate price to volume things as this most likely is competitively priced, at least comparable with imported American beer in 650ml bottles. Imported beer. Not local beer.

Yes price economy of scale cost of this and that, I get it all, and I’ll support you as I have so far, it’s an observation not a complaint.

If this was in bottles it would find a place in my fridge for those evenings when you want a great beer with a lot of nice things about it, I’m not popping the top on a can will give me that same sense of satisfaction, call me weird.

Back to the beer, which I’ve drunk the all of!  I wish I had another, or that this came in a bigger bottle (see what I did there) as I’ve finished a bit short on the total enjoyment. More fool me for getting the single can right.

The pdubyah-o-meter rates this as 9 a of its things from the thing.  This is one of the nicest beers of it’s kind that I’ve had recently, and if it was on tap somewhere I’d make a beeline for it. You don’t get  a sense of the 7% in this and it might lead you astray if you thought you were going to be in for a few in a session.