I’m going again, even though this was only about 30 beers ago, so once more into the breech with  –  Timothy Taylor Landlord  – English beer.

I really didn’t like it first time up, and was contacted by the importer and he offered me a new bottle of new stock. Humbled that anyone reads me I accepted. 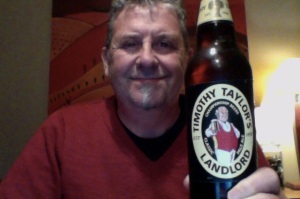 Brewed by Timothy Taylor in the gold old style that is a Bitter or it might be  of course a real old English Pale Ale and they are in Keighley, England

First brewed in 1952 as a bottled beer called Competition Ale. Changed name to Landlord in 1953.

Underwhelmed was how I had described it, and from that mark I begin. 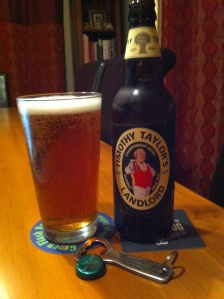 Firstly I know this is new stock as the label is a black oval with yellow border,  the last one I had was a yellow oval, black border. This is important.

Nice Golden orange pour with a nice firm/fluffy head that pretty persistent. Aroma blooms in the glass, and hints of grass.

Right then, that’s better! Much much better, but I’d still say that it was over-carbonated for my like.

But now I get why this is a well liked beer.

What a turn around!  At this level of ABV this drink would easily be acceptable as a session beer, where you could have a few and not lose the plot, and it would sit well with traditional snacks, crisps, chips or nuts etc.

The pdubyah-o-meter rates this as 7.5 a of its things from the thing.  So look for the black oval with the yellow boundary for the latest batch and you’ll get the idea that this is a beer that people connect with.

Let me say though that this isn’t a style of beer that will rock your boat in the purist sense of drinking beer to experience things, this sits in the commercial beer that is a bit good, and a ‘standard’  This does set the bar though.

Now I know a bar where this is going to be on tap…….

A gold to copper color, low carbonation and medium to high bitterness. Hop flavor and aroma may be non-existent to mild. Great to drink with steak and lobster

Classic English Pale Ales are not pale but rather are golden to copper colored and display English variety hop character. Distinguishing characteristics are dryness and defined hop taste, but more malt balance than what youll typically find in an American Pale Ale. Great to drink with all sorts of meats including roast beef, lamb, burgers, duck, goose, etc. Note that the term pale ale is used in England to signify a bottled bitter, and in that way there is no such thing as English Pale Ale to the English. The style is a North American construct, borne of the multitude of pale ales that pay homage to these bottled bitters – Bass in particular – and therefore the majority of true examples of the style are found outside Britain.