I thought I’d have a darker beer, so an Epic Imperium it is then.

“In Luke’s own words, its black, its soft, its malty and with notes of toasty loveliness”

Epic Brewing Company (NZ) brew this at Steam Brewing Company and it could be described as an: Imperial Stout or Foreign Stout, and they are based in Auckland, New Zealand. 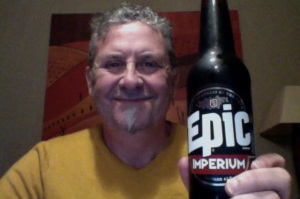 Don’t be afraid of the dark

The Epic Biennial Stout Series present Imperium. You are Tolerant. You are Subservient. Respect the Powerful. Worship the Elite. This is your future. You aren’t strong enough to speak up. Obey unquestioningly. Open the Bottle. Taste this Beer. Enjoy.

Should make a pleasing drink.

Great easy pour of darkness, which settles to a nice head of mocha brown but it isn’t persistent and fades to a heavy film. Aroma carries to the glass but doesn’t change.

I was expecting fuller and richer, but there is a burst of bitterness that then is over washed by a lovely richness of roasted malts and then back to bitter for the finish.

Hints of raisins and sweetness in there too, in the middle at least.

But this isn’t a ‘full’ beer, and is somewhat over burdened by the hops in this. Not much to indicate that this is a higher ABV beer either.

What to think then. Well there is expectation and then there is delivery. The gap is the disappointment.

This looks great, pours great, and sits well. There is a lovely aroma of chocolate and you can pick the hops aroma. And, it isn’t bad drinking, but it it is over-ridden by a bitterness from the hops in it and there isn’t a lot of body. I’m not going to say ‘thin’ as this isn’t.

The pdubyah-o-meter rates this as 7 a of its always random and unpredictable things from the things. This isn’t like a “Stout”, and I’ll admit to being no expert but when I think of Stout I wouldn’t think this.  I wouldn’t say either that it was “soft” as the hops make it somewhat nearer raspy.

Not bad though. But not sure I’d be fishing out to have another.

I found myself listening to Midge Ure – from the Album “Fragile” this is the title track.

The album is soft and easy going.

On the food front, Dinner on Saturday was Port Fillet, with rosemary and garlic roasted potatoes and buttered cabbage, which all came with gravy of course.