I kid you not this is  called Lucky Beer- Lucky Buddha. It even has a unique and amusing bottle, in the shape of a Buddha. Because China! Because Beer! Because cheap 🙂 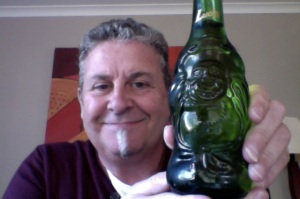 I win the beer in a comedy bottle comp

For the Lucky Drink Company this is brewed at Cheerday Hangzhou Qiandaohu Beer Co. and they give it a crack in the Style that is  Pale Lager Used to be brewed in Australia now it’s in China.

Light aromas of hops with nuances of honey & malt, which pre-announces the transcending flavours across your palate with a silky easy finish.

What could possibly go wrong…..

Awesome custom bottle, and even the lid is delightful. At least the packaging made me smile.

Pour is pale golden hello, head is fluffy and light.

Not a lot by the way of ‘bite’ from the hops, and the really doesn’t have a lot by way of flavour or profile.  There is no way to tell that it’s a beer of 4.8% ABV that’s a good trick.

I did pour to a glass, although I would love to have drunk this from the bottle for the craic.

Alas the best thing going for this is the bottle. The second best is the lacing in the glass, then the quenching nature of cold water. Then perhaps the delicate flavour that this has, very delicate.  NO struggle in drinking this despite it’s seeming lack of anything beer like.

Not a total disaster and would make a great domestic beer, which I’m guessing is it’s real market.

The pdubyah-o-meter rates this as 4 a of its things from the thing.  Not a beer to be taken seriously except by the accountants I imagine. But it did make me smile.

Listening to Jimmy Fontana – and you might know  Il Mondo