This episode: I have an expectation: Crispy, Zesty, Grapefruit, Hoppy. I have a beer, Badger Hopping Hare, some music: Dashboard Confessional, the double dip and a random number.

This was a gift for Fathers day, much appreciated, as is any gift, and available in supermarkets so not difficult to get, or particularly rare or crafty

Brewed by Badger (Hall & Woodhouse) in the style that is a Bitter and they are in Blandford Forum, England

Light and crisp with a wonderful hoppy aroma and bite, it is an ale that is ‘bound to satisfy’. 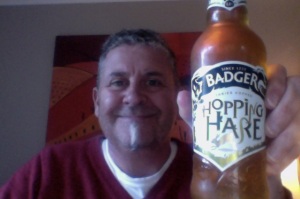 To give the Hare its distinctive and characteristic hoppy aroma and taste our talented team of brewers use Super Styrian hops (added twice to the Copper) and Styrian Goldings Dry Hop added to cask for extra aroma.

Triple hopped – Super Styrian hops added twice to the coppers then Styrian Goldings added. Hopping Hare is thrice hopped with three types of hop used during the brewing process. Aromatic Goldings and Cascade combine to provide an uplifting citrus-grapefruit and floral aroma, whilst First Gold carries the bitterness. The effect is a refreshing ale with a unique hoppy aroma and well-balanced bitterness that is bound to satisfy! It is a terrific match with roast lamb and spicy Thai dishes!

I see. Well I’ve been out exercising and so this will fill up the space left.

Pale as you can already see,  Wet oats aroma on opening, but pours nice with a decent head and an aroma that move slightly more to hops than dampness.

Bitter tang up front with this which is quite refreshing and quenching. I guess that’s the zesty ticked off.

I don’t get grapefruit.

It is crispy though.

What it isn’t is “full” in flavour, and there isn’t a lot of length or carry, but what there is is at a decent level, and that makes the beer a bit more engaging than say a commercial or domestic lager might.

There’s not a lot to add really, it’s a pleasant enough beer, but I fear that the style that is Bitter might be a bit sidelined by the many and varied IPA’s for instance, where you get bitter as a by-product. As an English beer style it’s a standard and it’s not as bad as I’ve drunk, and remember I used to be an Englishman at home as opposed to an Englishman Abroad and would have had this style regularly.

The pdubyah-o-meter rates this as 7 a of its things from the thing.

The Music as mentioned the band “Dashboard Confessional”, the Album I’m listening to is “A Mark, a Mission, a Brand, a Scar” with clear lyrics and some decent production. They made the song “Vindicated” that got airplay in the Spiderman 2 movie if you recall or care to remember.

For no reason this is the track “Hands Down”

A gold to copper color, low carbonation and medium to high bitterness. Hop flavor and aroma may be non-existent to mild. Great to drink with steak and lobster