Where in I have a small beer, listen to some noise, generate a random number, and second guess myself.

Yeastie Boys White Noise is my entertainment this afternoon, although it’s a small bottle so I might wait to early evening before I  drink it.

Yeastie Boys who brewed this at Invercargill Brewery in the style that is of  Wheat Ale and YB are in Wellington, New Zealand. 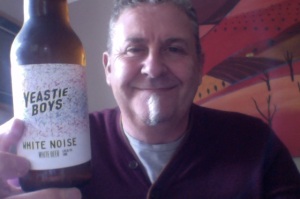 A quaffable, cloudy white ale that is perfect for those afternoon sessions after a hard day’s work or play.  Pours a cloudy pale straw colour with a dense mousse-like white head.

A perfumy coconut and vanilla note on the nose, with a little citrus and spice, and bready grains from the wheat. The mouthfeel is full for such a pale beer, but still very light and elegant.

The beer finishes with a cleansing acidity, a faint spicy note and only the mildest touch of citrus from the virtually non-existent hops.

Speaking of which the Hops are  Kohatu, Wakatu  and this is  Egyptian chamomile, it’s important.

An unusual aroma, that seems at both sour and floral but is also vague. 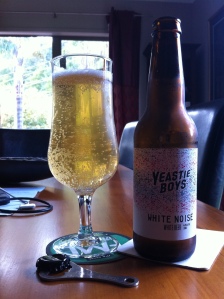 It’s really really pale, and pours with a thin film like head but it seems persistent, nice carbonation in the glass, it look ok.

I now thing the aroma is more like a cider.

I might be drinking this a bit cold, as the flavours seem really muted, I might let it sit a while.

I don’t know that joe average would know what chamomile would taste or smell like , but this has a really subtle and interesting flavour note to it. It’s more bitter than 9 IBU would suggest, and there isn’t a lot of body to it either.

Warming you get more lemon-like zest and crisp in the taste but it’s neither improving or getting worse.

As a non-threatening drink though it’s ok, nothing to put you offside or make you struggle to finish drinking

The pdubyah-o-meter rates this as 8 a of its things from the thing. I’m struggling to mark it more, but it’s a high 7  and nearly very good. Either I couldn’t wait long enough for it to war, or I over expected something more based on my ignorance of the flavours contained and indicated. – I since updated it to an 8 – see below

I was listening to some nice noise by way of  The Veils – this track “Another Night On Earth” from the album “Time Stays, We Go”

Golden to light amber in color, the body is light to medium. The wheat lends a crispness to the brew, often with some acidity. Some hop flavour maybe be present, but bitterness is low. Not as estery as German or Belgian-style wheats.