Chocolate on the nose, dry and roasted taste with a bitter finish.

I was in the beer shop, Liquorland in Forrest Hill, buying a well considered list of beers, and they kindly suggested that I try what they said was a beer not generally available in Auckland, from a new brewer – Sparks Brewing – their take on a Stout style – Frontier Extra Stout. Of course I believe anything. I check their website and it’s true!

Simply and crisply presented in  a 330ml bottle that contains beer that is 6.2% ABV, so 1.6 standard drink units, coming in at around 180 calories in the bottle. 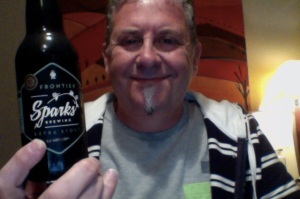 Rare as beer gets

A dark and intensely roasty ale, with strong aromas of chocolate and coffee. The rich body is balanced with all New Zealand hops added late in the boil and a good layering of crystal malt leaves a hint of liquorice and an almost rum like quality to the finish.

2012 National Homebrew Competition Gold medal recipe, considered by the judges as “a world class example of the style”.

Drink fresh or cellar for up to two years. Like I could let beer sit for 2 years.

Lots of rich chocolate on opening this, that’s a cracking aroma.

Thick deep dark pour with the most magnificent head of deep thick firm bubbles.  Deep and Thick the theme here so far.

Aroma carries to the glass but more towards a milk chocolate, it’s very very nice.

Giddy up! This is quite tart and bitter up front, but there is a magnificence of soft warm chocolate that crowds it out and gives it some balance. Decent length and finish that is to dry and bitter but not distractingly so.

Head has flattened out, and sits as a film in the glass.

Malt balance is nice, chocolate is there, Coffee is easily pickable.

This though might be a bit young and needing a bit of time to mature and settle into itself int he bottle. A task for which I have no patience.

This would push out the body a bit and allow the chocolate and coffee to work better together. Might also temper the bitterness. This one has a label that says it  was brewed on the 27th August – they might mean bottled? of course they might mean brewed, what am I a brewmaster? That would make it awfully young though.

Update “@SparksBrewing: @philwalter thanks for the review Phil. Spot on. And it is the bottling date! Thanks for being our first ever review!”

The pdubyah-o-meter rates this as 8 a of its things from the thing. I like this bit I’m not a fan of the dry finish so much. I really do wonder what this would mellow into in a few months or a year though. There is enough to suggest the coffee and chocolate might deepen, but would it be enough to edge the bitterness? Who knows?

All-in-All though thoroughly enjoyable and rewarding. Thanks Liquorland in Forrest Hill.

I’m listening to  and album by True Widow titled  Circumambulation. Somehow described as “doomgaze” or “Shoegaze” or “DoomRock”  in style. This is a track called “Four Teeth” It fits all those style and perhaps better in a dark room with candles.

Foreign Stout began with the beer that would become Guinness Foreign Extra Stout. This was a stronger, extra-hopped version of the basic Guinness Extra Stout, brewed to survive long journeys overseas. The classic FES still exists in a few different forms, but many of the original destination countries (Jamaica, Sri Lanka, etc.) now have their own, locally-produced versions. Foreign stout occupies a position between basic stout and imperial stout. It is sweeter than a basic stout, but not as robust as an imperial. It is less fruity and less hoppy as well. Foreign stouts are sometimes made with local grains and adjuncts sugar is not uncommon. Alcohol ranges from 6-8%