Addressing a beer remiss, I go for the Epic Pale Ale, Epic Music, Epic numbers and an Epic night out, or in.

You can only drink so many beers in a lifetime, so you better make each one count.

That’s where we can help. Because at Epic we’re obsessed with creating big hop-fuelled beers.

Many brewers would call that ‘insane’.

We call it flavour 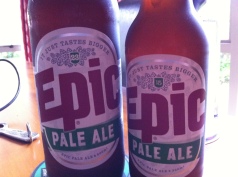 *Or there are 15 in the smaller bottle.

This would a bit like the 900 grapes in a bottle of wine thing, I’m guessing that each bottle requires 15/23 hops to make

What you’re led to believe; Impressive aroma of grapefruit and perfumy rose petals, flavour of luscious creamy malt sweetness and summerfruit and citrus, and a finish of lingering bitterness and residual, nearly oily fruity sweet flavour. 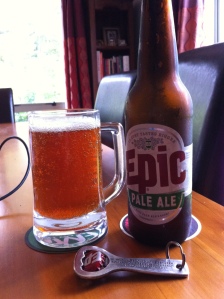 It has a very hoppy aroma on opening,  And pours the most amazing orange golden brown with a nice but fleeting head. Looks well carbonated in the glass.

This is slightly sharper than I was expecting but it is surprisingly pleasant and pleasing, and I can see why it has a lot of fans.  The aroma does come back and you get a nose of the hops before the sup, and then you get a  warm malty beer that has a reasonable bitterness and a finish that is more towards dry.

As a drink-alone beer this does come up a bit short in the body, and  therefore does need some food accompaniment to bring out its best points.

As a quaffable beer though, it’s pretty easy drinking and there isn’t a lot of negative points that make you reluctant to have another sup and I find myself with an empty glass and a wondering where it all went. No really I did.

Recapping though and all things considered I’m therefore not a huge fan of this, or perhaps it’s the style that I’m not big on. Being foolish, as I am, I have a 4-pack of the smaller bottles to soldier through, but lucky for me there is some robust food on the way so that should balance up nicely.

The pdubyah-o-meter rates this as 7 a of its things from the thing. It’s churlish to mark this other than a competent good not the unfathomable scale of things that are the thing. It’s not horrible, it’s not the worlds greatest beer, it’s worlds better than some I’ve had the pleasure of drinking.

Music wasn’t really Epic, more the mellow, this is a band called “The Ocean Party” and this track “Head Down” from an album called “Soft Focus”, the music was a lot warmer and calmer than the blustery chilly day out in the open. They’re on Spotify, Bandcamp and Facebook if you want to look them up.