La Debut De Tout – The Debut Of All –  an increasingly popular style the Saison. So here we go, Popular beer, popular music, popular numbers and pop-around.

100% NZ ingredients with Gladfield Pilsner, Aurora malt and NZ Liberty hops. The yeast is from DuPont brewery in Belgium.

Brewed by Liberty Brewing Co this is in the style: Saison and they are in Auckland, New Zealand.

This was a fill-your-own 1 Litre ‘growler’ that is a beer of 4.7% ABV which means that this is only 3.71 standard drink units worth of beer, this in total would be about 400 calories. 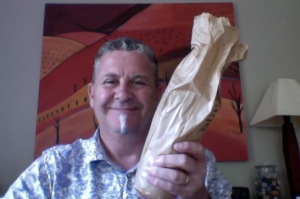 It’s in a brown bag, how I’ve fallen.

Looking for something different than massive hops? Like the occasional Belgian beer? Try this all new Liberty Saison, a very refreshing and slightly spicy summer Farmhouse ale! Noted characters are bubblegum with spice on the nose, grapefruit.

It’s incredibly pale, in the bottle, and of course the glass, for which I’ve gone the jam-jar look.

There are a couple early picks, one is the earthy tang and the other is the thinness.

This is though easy drinking and is easy to enjoy for the flavours and mouthfeel that it does deliver, it also looks great and retains it’s head, and has nice lacing in the tumbler.

Price-wise, something I’m generally loath to do, this isn’t expensive, and is somewhat money well spent if you compare it to a domestic type beer for the everyman. It’s also a lot more interesting and enjoyable, different and tastier. Rarer too.

My mood has changed in drinking this (and the music helped a bit) and I’ve become a lot calmer and nicer, perhaps I was ‘hangry’ and the snack I had helped too.

A very summery beer, that is soft, mellow, has some tartness in and around the middle, and an earthy finish that is both a surprise and unusual, but not unwelcome.

The pdubyah-o-meter rates this as an 8 on its things from the thing. * being ‘very good’. This is that beer that starts muddled, piques your interest and gallops on being the same, making it in the end something a bit nice and shareable.

Me First and the Gimmie Gimmies – and this is from the Album “Are We Not Men? We Are Diva!” a track  “I believe I can fly” yes it’s a covers band and it’s all glam rock

Hey it is so worth a listen if you want to sing you lungs out to old standards! Cracking!