The second of the #NZSecretSanta beers – Three Boys IPA – yes #NZSecretSanta, –  Secret Santa for NZ Twitter Users!,   I scored a couple of beers, this is the 2nd of them.

The generous addition of specially selected New Zealand hops to this brew creates a great aroma. A fantastic I.P.A.

Brewed by Three Boys Brewery, in the obvious style that is  India Pale Ale (IPA) and they do all that in Christchurch, New Zealand

The Indian Pale Ale was born when handfuls of fresh hops were added to barrels to preserve beer quality when shipping from England to colonial India.

It is the same generous additions of hops that allow Three Boys IPA to also survive the long haul, but when drunk fresh you can really appreciate the aroma our special selection of NZ hops creates.

Not a lot on opening that’s for sure, lovely hiss and a great aroma of sweet hops.

Brilliant warm orange pour with a decent and lively head that kept on giving. Looks slightly hazy in the glass, but it does look a picture. 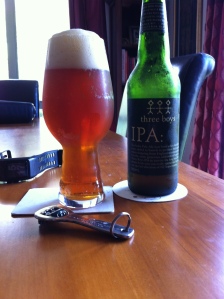 Eye scrunch bitterness was my initial take on this, that really was a burst that I wasn’t honestly expecting, and it is balanced on a lovely sweet caramel. The finish might be a little disappointing though.

So the only thing letting this down in a major way is the length and finish, the bitterness is lovely and the look of this is great.

This is a fairly solid IPA style of beer, nothing overly floral, overly citrus or over-hopped in a beer that is nicely bitter and easy drinking.

The pdubyah-o-meter rates this as 7 a of its things from the thing. I’d like for it to have had more middle, or body, whilst it is nicely bitter up front there could be a tad more, if you were being picky. Solid though, and an easy go-to beer in a crisis, and I’ve had far far worse.

Plus this was  gift and that makes it even better.

Music – well one of my favourite albums of this year – Brian Jonestown Massacre – This track a standout “What You Isn’t”, The Album “Revelation”