Lager, larger than life, large and living it large. All that with a Schipper’s – Mistress Pilsner

Schipper’s – Mistress Pilsner in the FYO station (keg) at the local shoppe.

For tonight then I have this , a 5%ABV, 50 IBU thing, 150 calories a serve size beer,all this making this 1 litre bottle about 3.94 standard drinks in total.

For Schipper’s Beer Company this is brewed at Tuatara Brewing Companyin the style of a  Pilsener and this brewer lives in Mt Eden, Auckland, New Zealand 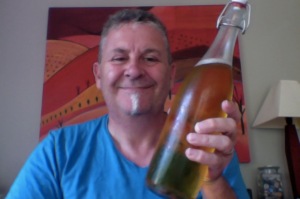 This is the brew you don’t take home to meet your mum and dad.

It’s a feisty, peppery Pilsner that will remind you why you fell in love with beer in the first place.

I’ve seen mixed review on this, but what could go wrong?

The nice thing about lower ABV beers is that you get to enjoy more of them. I’m sure there is a downside, and It could be bulk over substance argument. Lets not tarry on that.

Malty wet aroma on popping the flip lid, and a real hiss, seems well carbonated. Lovely yellow golden colour and it pours with a head that is small and seems persistent. 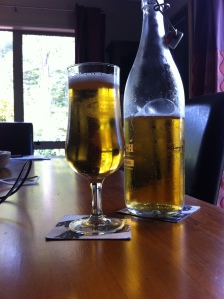 Interesting mouth taste this one. Grassy like you might expect, but without a sharp bite to it. Taste is really lingering.

I thought I really liked a good Pilsener, and I’m not sure this is it. It seems a little sweet and lacking in bite or peppers that were promised. This is the first beer of the day so I should be fresh and ready. Might again be one of those expectations over delivery thing, the gap being the disappointment.

I wanted hoppier, I wanted a crisper sharper taste, I wanted a bit of bite, a bit of the spice. The lingering mouthfeel is a little uncomfortable when delivered on such a gentle run-up.

The pdubyah-o-meter rates this as a 6  (= average) of its things from the thing. Possibly the most disappointing beer I’ve had for a while, which isn’t a good thing. I talked myself into having a really nice beer in the sun, and I got something that made me frown and chew my lip.

The saddest part is that I have to finish the bottle.

Music, well a mixed bag, and I was listening to “Girls in Peacetime Want To Dance” from “Belle and Sebastian”  who are an indie pop band formed in Glasgow in January 1996

Pop sums it up, marginal ear candy, I think I’m on the wrong side of the age line for enjoying this to be honest.

Bit of a bust for the early evening then, that happens now and again you can’t predict these things and if you don’t challenge yourself then there is no challenge.